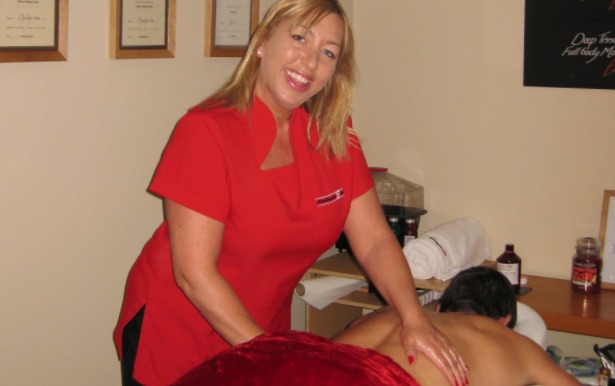 The owner of a sports massage clinic is accused of drunkenly coming onto a gay client during a massage and then becoming vicious when he turned down her advances.

Kerry Brocklebank runs the Huntingdon Spa and UK Sports Massage in Cambridgeshire. She’s currently being sued for allegedly sexually assaulting an unnamed male client then sending him a bunch of homophobic text messages after he rejected her.

The assault happened last October. According to court documents, the victim was waiting for his regular massage therapist, Henry, who was in the other room, when Brocklebank entered unannounced. She was drunk and dressed in a black and white polkadot bikini.

The victim was lying on the massage table wearing just his underwear. Seeing him there, exposed and vulnerable, Brocklebank allegedly started coming onto him, lathering her hands up with oil and massaging his thighs and calling him “darling” despite his pleas for her to stop.

“I felt violated, angry, and just not at all happy about the situation at all,” the victim told the court this week.

He continued: “She eventually moved around so that she was sat in front of me on a stool. I asked her to leave and get out. I could smell drink, as far as I’m concerned she was clearly drinking. It was quite provocative, quite flirtatious. She wasn’t dressed appropriately to be dealing with customers. She was wearing a bikini. She was very drunk.”

At this point, Henry entered the room. He told the court: “She was leaned over so her breasts would have been inches from his head. She looked as if I was spoiling her fun.”

After the incident, he says Brocklebank sent him and Henry a series of creepy texts messages. The alleged messages said things like, “Sorry, did I interrupt your gay time?” and “Believe me, if this goes to court I will ruin the pair of you.”

In court this week, she said she entered the room to get some towels when she discovered the client with his “legs kicked up behind him.”

“I think I may have interrupted something personal or inappropriate between him and Henry,” she added.

She admits to massaging the victim’s calves, but, she says, she only did so in an effort to “break the ice.” And when he asked her to stop, her feelings were hurt.

As a result of the whole thing, Brocklebank says she was left feeling “suicidal,” adding: “He had always been very jovial with me, I didn’t understand why he was turning nasty with me.”

Sobbing, she continued: “They have already achieved what they set out to achieve. They have ruined my business, ruined my home and ruined my life.”

Brocklebank is accused of sexual assault plus an alternative charge of battery and perverting the course of justice by sending “offensive and threatening electronic communications.”