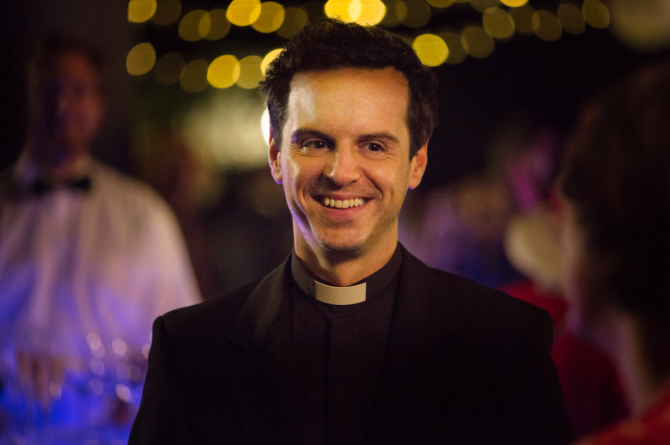 The British news outlet The Daily Mail reacted with hysteria this weekend by publishing a story about hunky gay actor Andrew Scott looking for love on Grindr. We’re just wondering why it’s even newsworthy.

Reporter Charlotte Griffiths claims to also have a copy of Scott’s shirtless photo, dubbing it “too racy” to publish, but adds: “let’s just say he’s not called the Hot Priest for nothing.”

In her write-up, she appears to pity Scott for needing to “resort to a smartphone app to secure a date.” Apparently Griffiths thinks that stardom comes with a free matchmaking service.

Andrew Scott, now 43, rocketed to stardom as the sexually ambiguous Jim Moriarty on the hit series Sherlock. Last year, he earned rave reviews for his work on Fleabag in which he played a character dubbed “Hot Priest.” Buzzfeed also dubbed Scott The Hottest Man on TV for his performance.

Scott had previously had a relationship with writer Stephen Beresford, though the two split last year. In interviews, Scott has said that being in a long-term relationship changed his view of sex and relationships and endorsed casual sex as a shame-free activity. “Sometimes having casual sex with people is what you need to do,” Scott told podcaster Elizabeth Day. “It’s really important. You learn from people. It’s not about the length of time you spend with somebody.”

We tend to agree. We’d also like to submit ourselves as candidates for Scott’s potential dating. Where’s the filter on Grindr for that?