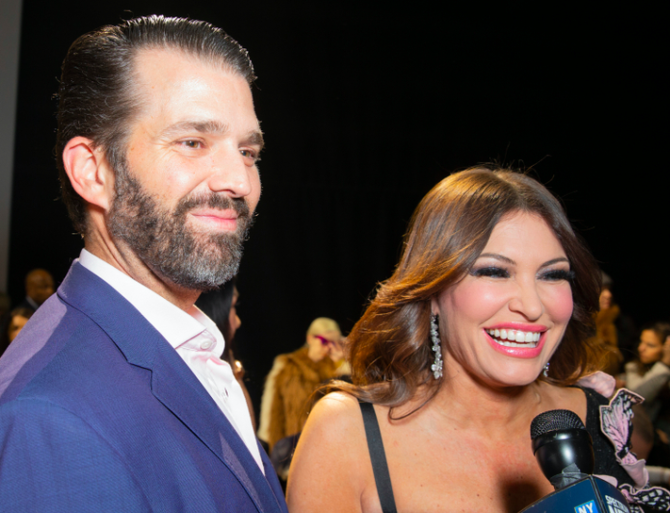 Is “The View” about to get a whole lot Trumpier? If Donald Trump Jr. and Kimberly Guilfoyle have their way, yes!

According to reports, the popular daytime talk show has been searching for a replacement for Meghan McCain, whose last episode will be July 30. Now, an ABC “insider” (read: Don Jr.) tells the Daily Mail that one of the names being seriously considered is none other than his girlfriend.

Don Jr., er, the “insider” says that if ABC wants to be gutsy, they’ll do a “massive shake up” and hire someone who will “give the other women a run for their money,” especially Joy Behar, who is purportedly freaking out because she just realized “they could be getting someone much further right on the political spectrum than Meghan who won’t put up with her crap.”

“[Kimberly] would be great as she would literally prosecute the other members of the panel every day of the week,” the insider adds. “One of our highest-rated episodes ever was when she stopped by the show with Don Jr.”

Ana Navarro is a Republican and has been a part-time co-host on the show since 2018, but the insider says she “doesn’t deserve the chair” because, “She is not a Republican in the true sense of the word. All she does is slam people who voted for Trump.”

They say the show needs a “Trump Republican” who can “reach more of the available audience at home.”

Just in case it wasn’t already totally obvious who this insider is, Don Jr. tweeted the Daily Mail article yesterday along with the caption, “LOL, hey ⁦@ABC even I’d tune in to see ⁦@kimguilfoyle do this. Kim vs the other 4 doesn’t seem like a fair fight though. You may need a few more libs. Chaos behind the scenes at The View as the show scrambles to find a ‘Trump Republican’.”

LOL, hey ?@ABC? even I’d tune in to see ?@kimguilfoyle? do this. Kim vs the other 4 doesn’t seem like a fair fight though. You may need a few more libs.

Chaos behind the scenes at The View as the show scrambles to find a 'Trump Republican' https://t.co/1XysCn6SmD

Remember that time that Kimberly Guilfoyle got fired from Fox because she was making sexual explicit comments to her coworkers.

So instead of “my father” on repeat every episode, we’d get “Don’s father” ad nauseam.

She has already been fired from 1 news agency due to sexual misconduct.
She is now blacklisted and unhireable.

Loudest in the room is not actually the one that is correct.

I don’t think the network will take a chance on a Ex Fox host fired for sexual harassment.

They’re looking for a host, not a parasite.

I know she’s part of your brand with the sexual harassment and all. But, usually, that’s disqualifies someone.

@ABC (probably) has a policy against hiring ppl with sexual harassment issues.

I never watched it before and would definitely never watch it with her on there.