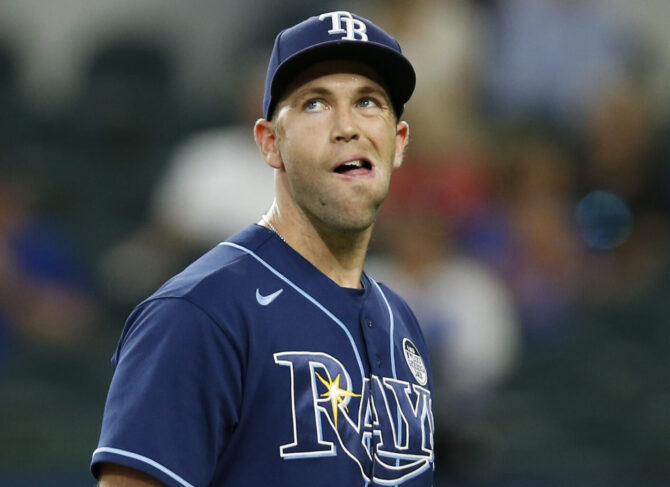 According to five pitchers for the Tampa Bay Rays, there’s no rainbows in baseball!

Pride night at Tropicana Field was apparently just too much for five of the pitchers on the Rays’ roster, who all felt the need to abandon the team’s special one-night-only rainbow logo jerseys for their regular outfits.

Players Jason Adam, Jalen Beeks, Brooks Raley, Jeffrey Springs and Ryan Thompson all refused to wear the uniforms required by their jobs for the night.

Today, we wear our #Pride on our sleeves pic.twitter.com/bcOLJNhx6Y

Despite treating this innocuous rainbow badge like the Mark of the Beast, the players wanted to make it clear that they “welcome and love” the queer community.

Jason Adam stated, “We love these men and women, we care about them, and we want them to feel safe and welcome here.”

Adam went on to say, “It’s just that maybe we don’t want to encourage it if we believe in Jesus, who’s encouraged us to live a lifestyle to abstain from that behavior.”

He is, of course, referring to [heretofore undiscovered scripture quoting Jesus as specifically condemning queerness].

This situation has social media delving once again into the conversation of using religion to justify blatant homophobia, and many are just plain tired of it.

5 Tampa Bay Rays players removed the rainbow patch placed on their uniforms for Pride Month because of their religious beliefs. It can’t be because they are Christian because Jesus loved everybody. So essentially they are telling their LGBTQ fans that they don’t count.

If your religious beliefs keep you from wearing a symbol of accepting everyone, then you don’t actually accept everyone.

Five Tampa Bay Rays: “No thanks, it’s against my religion”

Why do the marginalized always get so angry when I marginalize them? It was so much better when society didn’t care about their feelings 🙁

Reminds me of the group of Brooklyn Dodgers who refused to play with Jackie Robinson because of their “beliefs”.

Abstain from … loving your neighbor as yourself?

When did Jesus ever even imply he was anti-gay? They’ll never be able to answer that.

It would be cool if those 5 guys wore “I’m a homophobe hiding behind Christianity” patches.

At the end of the day, if these players don’t want to wear the uniform assigned by their employer, they have every right in the world to quit before next year’s Pride night rolls around. Best of luck to them!

For baseball content the gays can actually look forward to, here’s the teaser for A League of Their Own that just dropped today. The series lands on Prime Video August 12th: