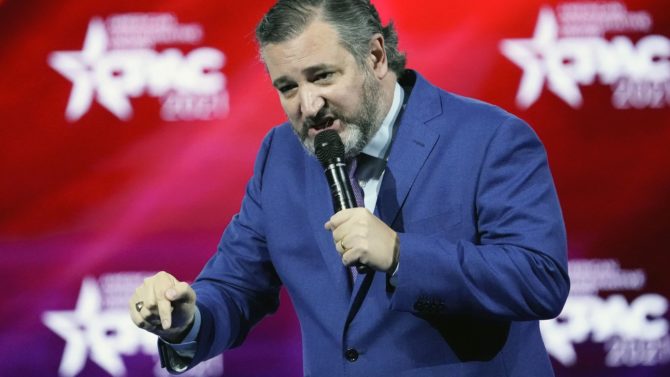 Senator Ted Cruz is currently in Orlando, Florida for the annual Conservative Political Action Conference where he gave his first big speech since that whole Cancun scandal broke last week.

But rather than deliver a typical political stump speech, Cruz decided to switch things up and try his hand at a little standup comedy.

Things went about as well as you might expect them to.

The 2024 GOP presidential hopeful cracked terrible jokes about cancel culture–“Jerry Seinfeld doesn’t tell comedy anymore because every joke has been canceled!”–while intermittently yelling at the crowd to “JUST HAVE FUN!!!” before heaping praise onto the man who once called his wife ugly and linked his father to JFK’s assassination.

The comedy routine, if you can even call it that, also included a joke about public health officials, saying they want people to wear masks “for the next 300 years,” and a homophobic remark about leftist men french kissing.

“We see leftists across the country shutting down churches. California, they’ve helpfully explained, you can go out and protest. You can scream and yell, ‘Abolish the police,’ and this virus magically, no one will get infected. You can French kiss the guy next to you yelling, ‘Abolish the police,’ and no one will get infected. But if you go to church and say, ‘Amazing grace,’ everyone’s going to die.”

But perhaps the worst part of the speech came when Cruz made light of fleeing to Cancun last week while millions of Texans remained without heat or power, hospitals ran out of water, and at least 80 people died, including an 11-year-old child.

Sen. Ted Cruz at CPAC: "Orlando is awesome. It's not as nice as Cancun."pic.twitter.com/TghkHUhOPy

Ted Cruz just was screaming like an unhinged lunatic at CPAC. So, normal.

Ted Cruz opens his CPAC set with a joke about going to Cancun, but leaves out the callback about the 11 year-old boy who froze to death in his trailer while Ted’s kids sunned themselves at the Ritz. Go big or go home, Ted. @SenTedCruz

“You know I hate thinking about men. Kissing each other. Tongues in each other’s mouths, rolling around like the lambada, the forbidden dance. Sweat glistening as their bodies move in time. The sweet surrender of touching … It’s wrong!” – Ted Cruz https://t.co/KIsi9Um6Zr

Ted “Carnival” Cruz line about men “tongue kissing” to the “forbidden dance” “sweaty” being disgusting sounds about like the lady doth protest, too much #tedCruz #TedCruzisADisgrace #phobe #CPAC2021 pic.twitter.com/sM7DaaNTvG

OMG! Ted Cruz is trying to do Cancun jokes at CPAC!
Does Texas think this is funny? pic.twitter.com/e4bJbxUwi1

I guess Ted Cruz preoccupies himself enough thinking about men kissing to have something to complain about. It says more about his own insecurities than about anything else. But you know what they say, “some men do and some do pay-per-view”.

Ted Cruz reminds us why it's so very important to work out your act in the small clubs before the big Netflix special at CPAC.

Ted Cruz is already joking at CPAC about how he deserted Texans in the freezing cold for sunny Cancun.

What an absolute shitbag.

I feel like Ted Cruz is beginning to model himself after Donald Trump Jr. which is…a choice.

So Ted Cruz joked about Cancun, said he hated thinking about two men kissing and then thought about it a lot, and then quoted William Wallace and screamed FREEDOM at the top of his lungs in the same speech? Is he on coke?

Ted Cruz on men french kissing. It’s almost as if he knows what that’s like. https://t.co/kjo4rmotFm

EDITOR’S NOTE: The original quote in this article was inaccurate and has been updated based on the official transcript of Cruz’s CPAC speech. We regret the error.