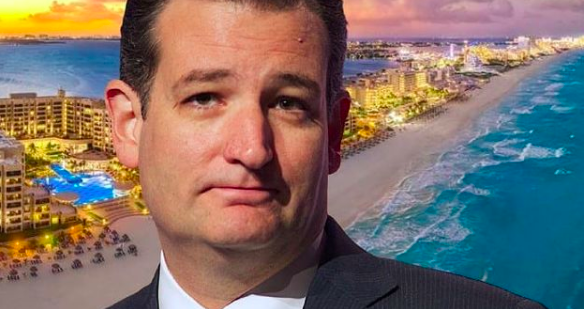 Ted Cruz is currently fielding a potentially career-ending public relations sh*tstorm after he was busted last week for abandoning his constituents during a deadly winter weather event and sneaking off to Cancún (in the middle of a global pandemic) then blaming the whole thing on his 10 and 12-year-old daughters.

Now, multiple media outlets are reporting another piece to the story that the antigay senator neglected to mention during his disastrous press conference last week: he invited his old college buddy, Dave, to tag along on the trip.

Axios has learned Cruz (R-Texas) invited David Panton, his longtime friend and former roommate at Princeton and Harvard Law, to join the family getaway. … Panton stayed at the Ritz-Carlton, while Cruz schlepped home.

In 2016, Panton, defended Cruz’s character to the New York Times, saying, “The media has caricatured Ted as this one-dimensional, hard-core guy. Ted is principled, but he is actually a good guy and was a great friend to me.”

So great, it seems, that Cruz invited him on what he swears was just a trip for his daughters and their friends.

Cruz spent his weekend doing damage control by pretending to care about his constituents and tweeting photos of himself shaking people’s hands and loading bottles of water into their trunks.

Meanwhile, over at his house, someone (probably an angry Antifa wackadoo) hired a Mariachi band to play outside on his front lawn so he could still enjoy the sights and sounds of Mexico from the comfort of his own home.

Aren’t you supposed to be quarantining?

“Hush just stop. There’s nothing you can do or say.” -Britney Spears, Stronger

Is this from yesterday when it was 70 and sunny😂🤣😂. You are shameless!!!

you should stop posting lmao

I know you have no shame but good Lord I am embarrassed for you. 🤦🏻‍♂️

Ted Cruz after dropping one 8oz Dasani in the back of a 4Runner pic.twitter.com/ttVH754gME