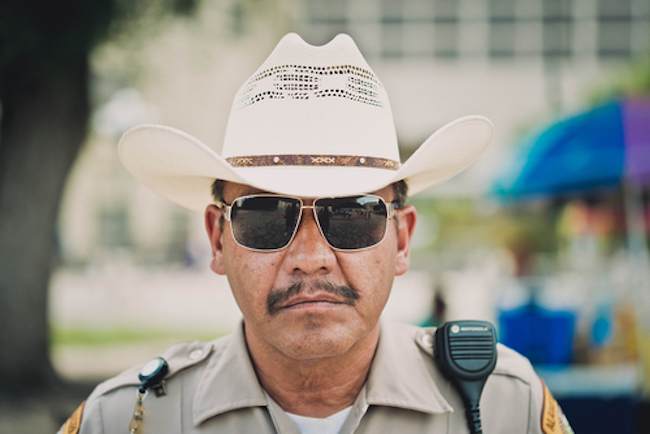 According to The Texas Tribune, the ban is no longer enforceable “because of a 2003 U.S. Supreme Court ruling.”

But a state statute banning sex between people of the same gender remains on the books.

In 1973, Texas made homosexual conduct a criminal act. People caught in the crime could be fined up to several thousand dollars and face jail time. Three decades later, the U.S. Supreme Court struck down the law in Lawrence v. Texas — a landmark civil rights case. The ruing invalidated similar sodomy bans in 13 other states.

Nevertheless, the ban has yet to be officially removed from the state’s penal code.

While the unconstitutional ban isn’t enforced by police, it can still cause a fair amount of confusion. In a 2011 article, Mother Jones chronicled a 2009 case in which two men who were kissing at a restaurant in El Paso were threatened with jail, and police cited the “homosexual conduct” statute as their rationale.

Related: 2 Guys Kiss in Texas Restaurant, Get Kicked Out, Threatened By Cops

In that case, two anonymous men kissed while in line to order food at Chico’s in the El Paso area.

They were among a group of five gay men, who then sat down after ordering.

The restaurant’s security staff asked them to leave, and guards forced them out the door.

At 12:30am on June 29, the group called the police, thinking they’ll be backed up for Chico’s discrimination.

No dice: A police officer, arriving an hour later, told the group it was illegal for two men to kiss in public, citing the “homosexual conduct” ban.

Though it’s since been removed, Chico’s Wikipedia page was updated after the incident to say that the establishment was “recently made famous for forcefully ejecting five gay men because of ‘that faggot stuff’, after two of the men kissed.” (However, the Wikipedia entry now features a lengthy section about the controversy.)

Democratic lawmakers are trying to get the language repealed during this legislative session, and it’s hardly the first time they’ve made such an attempt.

Despite the “homosexual conduct” ban being wholly constitutional and totally unenforceable, every attempt to permanently remove the language from Texas’s criminal law has completely failed.

Take from that what you will.

down and out
28 comments