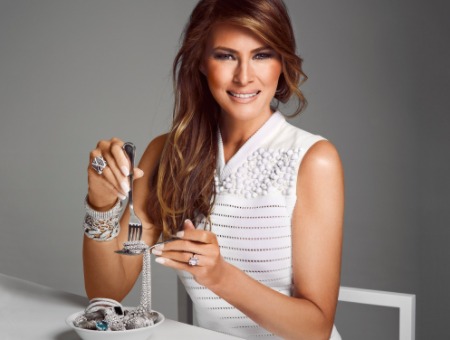 October is Hispanic Heritage Month and the White House celebrated the occasion by hosting a dinner on Friday evening.

During the event, Donald Trump took a moment to welcome everyone. Then he mocked how Puerto Ricans pronounce the name of their country:

Related: Melania Trump just gave a speech about bullying at the United Nations and Twitter can’t even

The Donald then went on to say he “knows some” Latino people and “they’re very tough and they’re very smart” before adding “sometimes they’re too tough,” harkening back to his racist “bad hombres” remark from the 2016 presidential campaign.

After the event, First Lady Melania Trump tweeted some rather dark and somber-looking photos of the allegedly “wonderful celebration”:

Naturally, folks on Twitter had a lot to say about it…

Oh Hispanic pride??? You mean some of the people your husband called rapists and drug dealers??

Too bad the Puerto Ricans couldn't make it.

What hypocrisy coming from the most racist administration!! Try actually helping & respecting all POC through equals rights & aide to PR.

If you hate the Mexicans so much why are you celebrating Hispanic Heritage Month at the whir house?

Pretty tacky to have the gall to celebrate Hispanic heritage when her husband pardoned Arpaio. The whole Trump family is garbage.

Meanwhile, your insane hubby jokes about WAR. You are BOTH losers of the worst order!

How about spending $$ in those who have no water to drink or food to eat in PR?
Also, how is the cyber bullying campaign going?

I know! Let's celebrate Hispanic Heritage Month with policies and statements that are respectful to Hispanics!

"And then we deported them all."