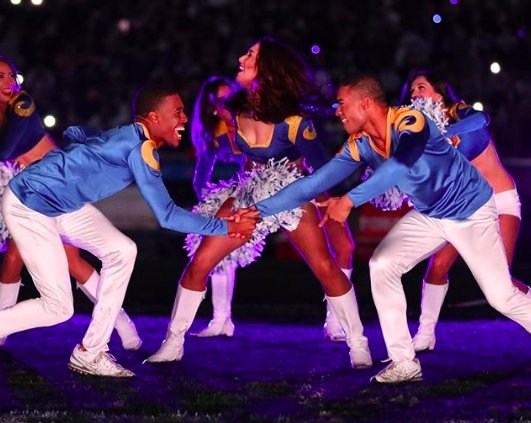 Quinton Peron and Napolean Jinnies are set to make history when they perform at the upcoming Super Bowl.

The duo, who became the Rams’ first-ever males to join it’s previously all-female cheerleading squad at the beginning of the 2018 season, will now become the first male cheerleaders ever to perform at Super Bowl history when the Los Angeles Rams face off against the New England Patriots.

“I want to prove that boys can dance, too,” Peron said shortly after joining the squad in 2018. “I am an artist, I am a creative person… and we can do it, we can hang with the girls!”

This week, the guys appeared on GMA to talk about being in the Super Bowl.

“It’s been a crazy ten months,” Jinnies said. “Dancing hard and really engaging with our community and our team and supporting our players.”

“I can’t believe that we made it to this point, so I’m pretty sure it’s showing off that we’ve been working pretty hard.”

Peron, Jinnies, and the rest of their squad will cheer on the Rams as they face off against the New England Patriots on February 3 in Atlanta.

Watch Peron, Jinnies, and their coach Emily Leibert’s appearance on GMA below.