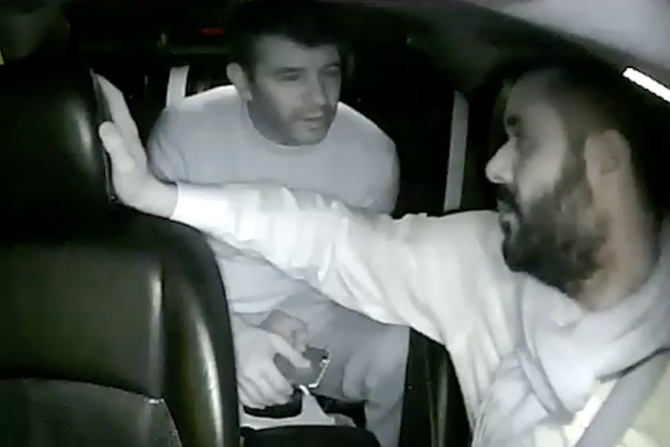 A video has emerged of Uber CEO Travis Kalanick arguing with an Uber driver about how the company treats its independent contractors, and it’s a real doozy.

If you’ve been out to a bar anytime in the last five years and left just barely remembering how to operate your two legs in an alternating pattern, then odds are you’ve interfaced with ride sharing apps like Uber and Lyft.

The two companies have been in fierce competition with one another, with Uber taking most of the heat for playing dirty.

Related: This Guy Turned Ride-Sharing Into A Real Drag

And more often than not, the drivers get the shortest end of the stick.

In the video obtained by Bloomberg, the notorious executive shimmies to Maroon Five while riding around San Francisco. The driver, Fawze Kamel, begins chatting with Kalanick once they arrive at the destination, and things rapidly turn from polite to tense.

Kamel complains that the company has been dropping its ridesharing fares so much, his own slice of the pie in the higher-end Uber Black is getting squashed in the process. Kalanick defends the actions as necessary to compete with Lyft, but in the process, becomes quite aggressive towards Kamel. He explains that people like Kamel “don’t like to take responsibility for their own sh*t” and instead try to blame other people for their problems.

Related: Ack: Another Uber Driver Kicked Out A Gay Couple For Kissing

Where have we heard that before? Oh, it’s the calling card of privileged conservatives — everyone can succeed if they just work hard. And if that doesn’t pan out, the only person to blame is yourself. Perhaps Kalanick learned this particular line while sitting on President Trump’s advisory council. Who knows?

While it’s hard to know just how much Uber affected Kamel’s bottom line, there is some evidence to back up his claims. Uber drivers have complained that fare cuts are making the job unsustainable, and the company recently paid $20 million to resolve complaints that it exaggerated drivers’ potential income. At least for some workers, then, Uber isn’t nearly as alluring as it was in previous years.

Details aside, this is not how we would hope a CEO would speak to an employee at the lowest rung of the ladder — a rung that is designed not to lead up.

Watch below (their conversation begins at the 3:56 mark):