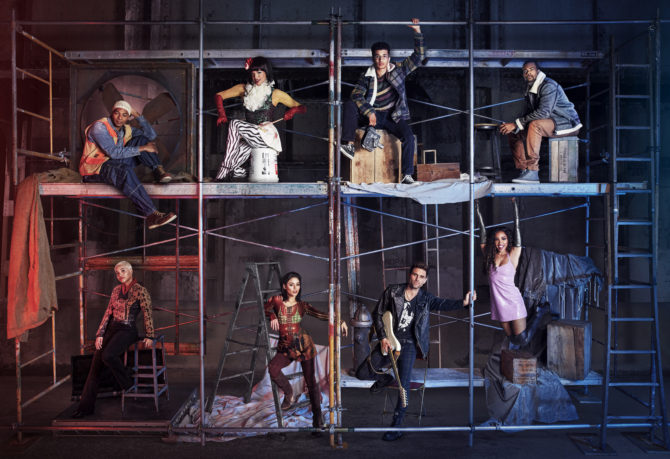 Rent sparked a revolution when it hit the Broadway stage in 1996.

The show that changed musical theatre stands poised to do it again, courtesy of a special live performance on Fox airing January 27. The story follows a group of hip artists looking for love & hope in early 90s New York amid the heroin and AIDS crises.

The live production marks Valentina’s debut in a dramatic role as the HIV+ street drummer and drag queen, Angel. Angel’s example living life for each day despite his impending death makes him a beacon of hope to the rest of the characters.

We caught up with Valentina (real name James Leyva) between rehearsals to chat about the much-anticipated production.

Thanks for taking a few minutes to chat with us.

This is your first major acting role and you are doing it on live television.

As far as being live, yes. What makes that not so nerve-wracking is that baby, that’s what I do for you every day. Day in day out, when I do my live shows there is no edit, there is nothing other than the reality of watching me on that stage and giving you performance at the moment. That’s what I come from. That’s what I do. Now was I doing everything with proper technique? I wasn’t Mary.

I have a lot to learn. So now I have a vocal coach that I see every other day. I’m learning my lines as an actor and where the camera will be and how to be authentic. I’m learning choreography while engaging my diaphragm and twirling in heels and jumping on tables. All these challenges that come are so amazing because they’re blessings. I don’t get carried away thinking about how big of a deal this is. I get more focused on what my duty is as an artist to really deliver, in the moment, my very best. And to grow and challenge myself. I’m definitely focused on becoming a good actor, and to integrate the right vocal technique. More than that, more than twirling right or hitting the high note, it don’t mean s**t if you don’t mean it–if it’s not authentic.

What was your first exposure to Rent?

I love Rent. I learned the music for Rent when I was in high school when we were doing a show featuring different songs from Broadway shows. We learned “Seasons of Love.” Then, I was a baritone. Now, they got me singing these high notes as Angel, girl.

We look forward to hearing them.

When it airs, I’m going to kill those notes. It’s going to happen.

Did you have to audition?

Oh yes, many times. I had to go through a whole process. I had to really focus every time I had an audition. I really wanted this. So when I got all the way through to the finals, there are some days I wonder how I made this happen/

Because I’m definitely taking on a lot. It’s very challenging, and it’s this great opportunity. I’m so blessed. I’m going to give it all that I have as Angel.

What else are you doing to prepare for the role?

I’ve spoken to a lot of people that grew up at that time, in the 80s and early 90s, during the AIDS crisis. I’m really studying friends of mine that have similar character traits to Angel. I have a friend of mine who is so giving and loving and never asks for anything back. So I’m really trying to spend time with my friend. I haven’t told him that I’m studying him.

I hope he doesn’t get the point that I’m doing this because it’s more like a personal thing. Just understanding what that means and why [he’s so giving]. Angel is really selfless and just like a saint. I also have the vocal coach I’m working with. I have a dermatologist who is getting my face ready for the cameras because of HD girl!

I have a personal trainer to get my body snatched. Do you want the real answers? I’m trying to look good on that camera, OK?

Enjoy the star treatment. Have you all been rehearsing together?

What’s it like working with Alex & Michael as directors?

I’ve been working with Michael Grief since the last audition. It was kind of like a work session where they were trying to see on their camera—they were recording it—if I could give certain energies. I just remember from that experience, working so hard. He was coaching me, imagine this, imagine that. When he speaks to me in that way when he’s really believing in me, when he does that with me, it’s so amazing what I can discover in myself. He worked with the original cast, so he knows this inside-out.

As far as Alex, we’re now on the Fox Studio lot for the first time. He’s the one that’s going to be in charge of the camera and when I say my lines, it’s for the camera. So now is where we collaboratively mix all these worlds together which makes the live experience so different from a Broadway show or TV show. It’s going to be magical.

Have you been in touch at all with Wilson Jermaine Heredia, who created the role of Angel on stage, and played him in the movie?

I’m going to be honest—I haven’t. It’s been on purpose, and I hope I don’t offend anybody, but there’s a specific reason I haven’t. I want to approach the character blindly. I want to go through an authentic process of building something through my heart, and through Michael. Once I get to a point where I have my dish, I’m going to reach out to all my fellow Angels that I salute. I am grateful for the privilege of playing the character. I’m so blessed to have the opportunity to be part of so many previous Angels, to sand in their company. I think it’s my duty to bring something authentic and new. Does that make sense?

Absolutely. Do you want to continue to work as an actor?

I love it. I want to continue working as an artist. I’m always growing and trying to challenge myself. I’m really lucky that I have my platform of drag to always fall back on, but I want to explore myself as an artist the best I can. I’m so grateful that I have these opportunities for myself, for my drag community, for my queer community.

It’s also important to know that I wouldn’t have these opportunities if it weren’t for RuPaul. If I get more opportunities as an actor, I really thank Drag Race for having given me the platform to be discovered for something like this. Now I’m really grateful to Fox for having given me this chance, to be discovered as an actor, as a singer. I’m really excited about this journey.

Would you be open to roles out of drag?

Oh yeah, Mary. I want to go there. I want to serve the judges with my versatility.