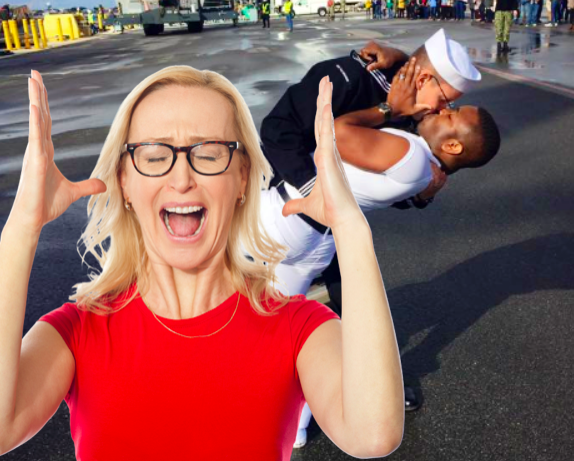 Last week, News4Jax in Jacksonville reported on U.S. Sailor Kenneth Woodington, who won a raffle to get the “first kiss” upon disembarking USS The Sullivans after returning from seven month deployment to the Persian Gulf and Europe. 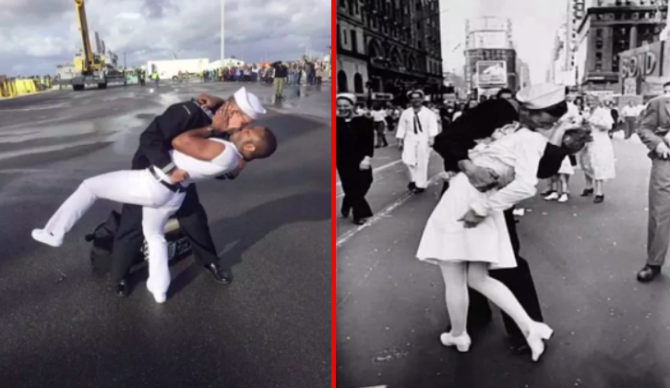 Well, not everyone thought so!

After broadcasting the kiss, the station was bombarded with pissy letters and phone calls.

“How sad that your station has dropped to such a low as to show a gay couple kissing on your newscast,” one viewer said.

“I thought this was a ‘family friendly’ news channel,” another wrote.

Asked how they felt about the negative response, the couple tells News4Jax they couldn’t care less.

“Honestly, I’m the type of person who doesn’t really care that much about what people say,” Kenneth says.

“My grandmother always taught me, she said, ‘You know some people have a different life and this is how they are and you just have to treat them as such, and treat them with kindness and respect,'” Bryan adds.

The photo was also shared on Naval Station Mayport’s page, where it received pretty much the opposite response. The comments were overwhelmingly positive.

“Times have changed when a gay sailor can welcome home his partner without fear,” one person wrote. “Welcome home. Life is short love whoever you want to love!”

“I’m not gay and this doesn’t offend me one damn bit,” another said. “Why should it? Love is love for goodness sake!”

“A new twist on an old favorite!” a third person commented. “Love it!”

Some people had a little fun with it by mocking those bitter News4Jax viewers who found the kiss so offensive.

“This makes me sick to my stomach,” one person joked. “White shoes after Labor Day!?”

“This is disgusting,” another wrote. “The weather should be ashamed of itself looking all gloomy.”

“Dammit, this is exactly what I warned you about, running off and joining the Navy!” a third person added.

Bill Austin, spokesman for Naval Station Mayport, tells News4Jax that boys kissing boys and girls kissing girls has happened many times before and it’s not an issue for the Navy, which he says has “always been gender neutral and on the forefront of progress.”