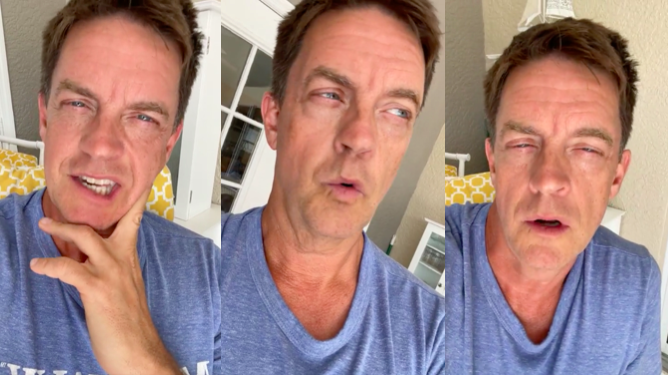 Stand up comic Jim Breuer announced this week that he’s “absolutely not” performing at any venues that require proof of COVID-19 vaccinations, calling the public health precautions “segregation” and “enslavement.”

“Due to the segregation of them forcing people to show up with vaccination, to prove you’re vaccinated, to prove you’ve had a shot, I’m absolutely not doing those shows,” Breuer said in a 20-minute rant on Facebook Live.

He added that he’ll be canceling shows in Michigan and New Jersey because, “What these establishments are doing are wrong! What this dictatorship is doing is wrong!”

“I know I’m going to sacrifice a lot of money,” he continued, “but I’m not going to be enslaved by the system, or by money, and nor should anyone that wants to laugh or be entertained.”

Just to be clear, nobody is being “enslaved” by anyone here. Certain businesses are merely exercising their legal right to refuse service to customers who don’t show proof of vaccination. Granting businesses permission to discriminate against anyone they want is a fight conservatives fought (and won!) in the Supreme Court with that homophobic Colorado baker case back in 2018.

Announcement on shows being moved or cancelled due to SEGREGATION

“I have to stick with my morals. I have to stick with what I know is right. As a human to another human, when you have to be forced, bribed, dictated, which is basically what is going on,” the 54-year-old SNL alum continued, adding that both he and his wife, as well as their daughter, all had COVID-19 and survived.

“No matter what your feelings are in it, I don’t care if you’re vaccinated. That’s great. It’s a choice,” he said. “If you have anything else to say, I honestly don’t care. So don’t leave comments going, ‘Oh this is a good thing.’ I highly disagree with you and I will always disagree with you.”

Breuer followed up his little Facebook rant with an appearance on Fox News, where he told the network’s resident homophobe, Tucker Carlson, that he’s not vaccinated, nor is he a “demon,” then he railed against President Biden for “threatening” him.

Seems like one of those clips from a school board meeting pic.twitter.com/BND4dYrm7x

In 2009, Breuer did a Q&A with the band Metallica, during which he asked whether any of them would be OK playing a gay man in a movie if it meant they could win an Oscar.

In 2011 (and again in 2014), he defended Tracy Morgan for making a homophobic joke in a standup set and said the comedian never should have apologized because “a joke is a joke.”

“Now he’s gotta apologize and do all these kind of different things for the community which is really, I think, is kind of stupid, to be honest with you,” he said on his SiriusXM radio show in 2011.

COVID-19 cases are up all across the country because of the highly contagious delta variant. The vast majority of recent coronavirus-related hospitalizations and deaths have been among people who are unvaccinated.