The Essential: The United States vs. Billie Holiday

Oscar-nominated director Lee Daniels returns with his latest big for awards glory, and a Hell of a bid it is. The United States vs. Billie Holiday recounts the troubled final years of bisexual singer Billie Holiday. Though one of the few black superstars of her day, Holiday struggled with heroin and sex addiction…not to mention a decades-long vendetta by the racist US anti-drug Czar Harry Anslinger (Garett Hedlund). As Holiday’s anti-lynching anthem “Strange Fruit” becomes a rallying to the emerging Civil Rights movement, Anslinger works to destroy Holiday in hopes of maintaining the status quo.

The United States vs. Billie Holiday benefits foremost from a sensational performance by newcomer Andra Day in the title role. Day gives one of the best performances of the year, and is a shoo-in for an Academy Award nomination. Likewise, Daniels’ direction shines in a gobsmacking scene of a lynching that plays for several excruciating minutes without a cut. Unlike other Holiday biopics (namely Lady Sings the Blues) which focused on the singer’s woes as “personal” issues, Daniels ties Holiday’s plight to a larger, still-ongoing narrative about racism in the US. Featuring fine supporting work by Trevante Rhodes, Natasha Lyonne and Leslie Jordan (in a wig no less), The United States vs. Billie Holiday paints a vibrant image of a queer legend and will remind viewers that activism comes in all forms…even in a song.

The Shocker: The Obituary of Tunde Johnson

At long last, our favorite film from the Toronto Film Festival 2019 arrives for the masses. The Obituary of Tunde Johnson plays less like a traditional movie and more like a rhyming poem. As played by 13 Reasons Why’s Steven Silver, Tunde Johnson is the closeted gay son of African immigrants who, though forces unknown, must relive the day of his death over and over. Worse, as in Groundhog Day, Tunde’s death seems unavoidable, no matter what precautions he tries to take.

Silver gives a fantastic, mature performance in the lead, while supporting players Spencer Neville (as Tunde’s closeted boyfriend Soren) and Nicola Peltz (as Soren’s girlfriend Marley) deliver strong supporting performances. Ali LeRoi directs with confident style, though the real standout is writer Stanley Kalu, who penned the semi-autobiographical screenplay. Tunde marks Kalu’s debut as a compelling and provocative writer; though the movie may be his first, it will not be his last.

The Humanizing: Trans in Trumpland

It goes without saying that four years of Trump Administration policies took their toll on queer people, with transgender folk under constant attack. Trans in Trumpland, the new series produced by Hustlers star Trace Lysette, follows a wide range of transgender Americans living in states hostile to them. Each episode spotlights a new subject, ranging from trans teenagers to military veterans fighting back against the Trump transgender troop ban. The series personalizes an otherwise abstract topic, sharing personal stories that humanize the effects of the draconian policies. More importantly, the show also offers hope and a path forward for all LGBTQ people, reminding viewers that when we stand together as family, we help create a safer, more equitable nation. Gentle, passionate and urgent, we offer it up as an inspiring example of contemporary activism, and a much-needed personalization of how bigoted policies erode justice for all.

This awards-contender animated short film fell in our laps, courtesy of a reader. We’re so glad it did. Kapaemahu retells the Polynesian legend of the mahu, four third-gender (or gender non-binary) wizards who bestow blessings on the Hawaiian people. The mahu leave behind four magical stones on Waikiki Beach with the power to heal before vanishing into history. Directors Hinaleimoana Wong-Kalu, Dean Hamer, Joe Wilson and Daniel Sousa craft a painted visual style reminiscent of traditional Polynesian artwork. Similarly, the film is all told in Olelo Niihau, the traditional Hawaiian language. Kapaemahu has the feel of a Disney fairytale, albeit in a truncated form…and with more queerness. It’s a beautiful, magical take on a little-known legend.

The Return: The Q Agenda

The popular Latin/queer-themed talk show returns for Season 5 this week with one Hell of an opening guest: Veneno star Daniela Santiago, direct from her native Spain. This season also sees hosts Juliana Joel, Lianna Carrera, Victor Ramos and Enrique Sapene welcoming Latina icon Charo, actress Carmen Carrera, author Boris Izaguirre and plastic surgeon Dr. Mariana Vergara to the set to discuss issues facing the queer community. Fortunately, the ever-enthusiastic hosts have also found a way to film in studio while adhering to social distancing guidelines; the result is a much sharper, energized show in which the hosts get to showcase their chemistry and humor together. Oh, and the Season Finale also features an appearance by Queerty’s best looking (and only) Entertainment Editor, which hopefully offers a bit of incentive to watch.

The Soulful: Hunker Down Radio with Leslie Jordan 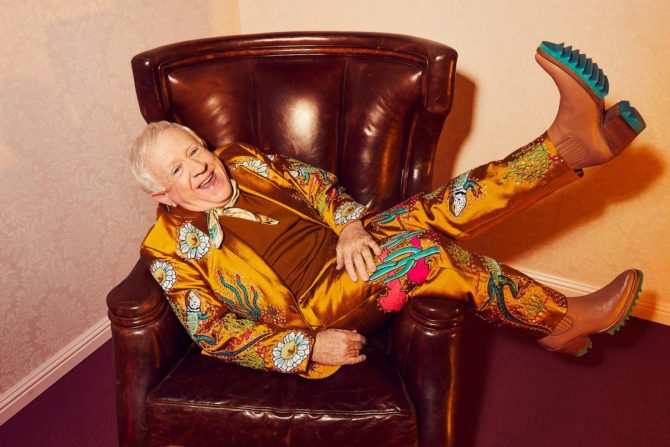 The breakout star of the COVID-19 pandemic (dubious title though that may be) launches his own streaming radio program this week, co-hosted with country songwriter Travis Howard. Together, the pair offer a humorous look inside Jordan’s daily life, served alongside a hearty dose of his most beloved country, gospel and blues music. We’re guessing that will also include a preview of Jordan’s upcoming country album, Duets. Country music isn’t exactly our favorite genre, but the welcome wit of Leslie Jordan always puts us in a good mood. With the pandemic finally on the wane, we could use a bit of his heartfelt cheer.

The Sip: The Stinger

In honor of the late, great Billie Holiday, give her favorite cocktail a try. A sweet & smokey stinger packs a wallop like only a 1940s-50s cocktail can. No wonder Holiday’s manager used to call her performance venues ahead of time…to make sure they didn’t have the ingredients on hand.