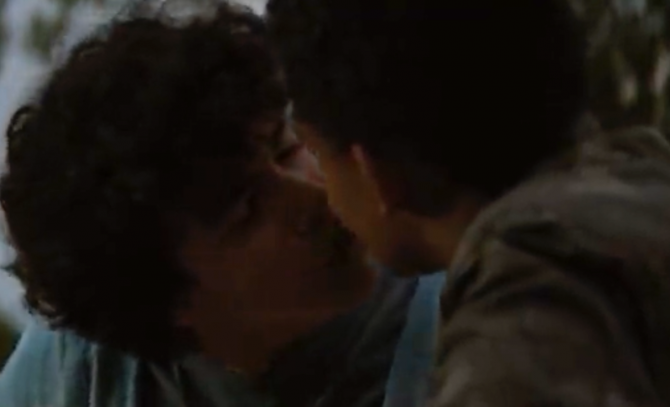 The Chucky TV series featured its first same-sex kiss this week in the fifth episode of season one, between 14-year-old protagonist, Jake (Zackary Arthur), and his friend Devon (Bjorgvin Arnarson).

After the friends think they’ve saved their town from the evil Chucky doll, which Jake purchased at a yard sale, they stop riding their bikes and have a chat.

Jake asks: “What are you thinking Devon?”

“I’m thinking, this is a problem we can solve together,” Devon says before Jake laughs says “okay.”

They lean in for a brief kiss, pull back and laugh for a moment, then share another.

JAKE AND DEVON THIS IS SO CUTE #chucky pic.twitter.com/125aJmgW48

It’s an adorable moment, and a wonderful one for younger, queer audiences in terms of representation. Of course, the threat of Chucky still looms — they just don’t know it yet.

Speaking recently to SFX, 58-year-old series creator Don Mancini, who is gay, reflected on the increasing gay representation in the Chucky franchise.

“Ever since Bride Of Chucky is when I started deliberately injecting specific gay content into the franchise. And with each successive film, I’ve sort of ramped it up more and more,” he said.

“So taking it into the medium of TV and having so much more storytelling space at my disposal, which necessarily means so much more opportunity to explore character relationships,” he continued.

“I realized that it gave me an opportunity to really be more personal, and even autobiographical than I’ve ever been before. So the character Jake, played by Zach Arthur, there are a lot of autobiographical elements for me in that character.”

The original Child’s Play debuted on movie screens in 1988 and spawned six sequels as well as a reboot in 2019. The franchise attracted a devout cult following who lauded the series for its horror–and camp–elements.