The soapy mystery series returned to HBO June 9. So why are we mentioning it now? Simple: if Season 1 was any indication, you’ll want to binge through this one right away. We went to the liberty of holding back to amass half the season. The new episodes find Meryl Streep joining the main cast, as the ladies of Monterey find themselves in the midst of a possible murder investigation. Gossip swirls and bitchy comments fly as does the satire of upper-class women with too much time and money on their hands. If nothing else, the show is worth watching for an outstanding cast, which includes Nicole Kidman, Reese Witherspoon, Laura Dern, Zoe Kravitz and Shailene Woodley.

The Conundrum: I Love You, Now Die

For anyone now reading this who has ever used a dating or hook-up app, chatted on instant messenger, used social media or just sent a text message (and if you’re reading this, let’s face it, you have), you’ll not want to miss the latest in HBO’s catalog of provocative documentaries, I Love You, Now Die. The two-part series chronicles the case of Conrad Roy, a handsome, vibrant 18-year-old who committed suicide in 2014. Police later arrested his girlfriend, Michelle Carter, for murder, as she actively encouraged him to kill himself. There’s much more to this case than it first seems; less a story of tainted love, I Love You, Now Die develops an image of a society where mental health goes ignored, even among families, and how online relationships often become more about what an individual projects on to them, rather than a connection between lovers. Given the number of LGBTQ Americans who rely on online meetups for sex, dates and friendship, it shouldn’t be missed.

The Sweet: Out of Iraq: Where Are They Now

Back in 2017, we all fell for the love story between Nayyef, a gay Arabic translator and Batoo, the Iraqi soldier who stole his heart, and their subsequent struggle for Batoo to escape persecution in Iraq for the United States. Now World of Wonder launches this mini-doc, catching up with Nayyef and Batoo as they preside as Grand Marshals over the Seattle Pride Parade. For anyone feeling a bit of post-Pride withdrawal, Out of Iraq: Where Are They Now should help revive that rainbow glow.

Streams on World of Wonder Presents Plus.

The OG: Tales of the City

Speaking of withdrawal, if binging the Netflix revival of Tales of the City has left you itching for more, never fear. The original miniseries has finally arrived on Netflix, bringing with it a hearty dose of queer history, nostalgia and soapy allure. Moreover, a viewing of the classic series offers insight into the characters and their relationships, especially that of Anna Madrigal (Olympia Dukakis). Far from the tigress in winter of the new series, the original finds her at her most robust and outrageous queer hippy charm.

The Sing Along: Mary Poppins Returns

Coming to Hulu this week, the camp classic about a high school beauty pageant still makes us giggle more than 20 years on. Moreover, though Kristen Dunst and Denise Richards get the top billing, the movie also offers a hilarious look at some of its supporting players who went on to major stardom. Amy Adams, Brittany Murphy, Allison Janney and Thomas Lennon all have supporting roles. Our favorite bit: Murphy’s Lisa, who continually obsesses over her drag queen brother. 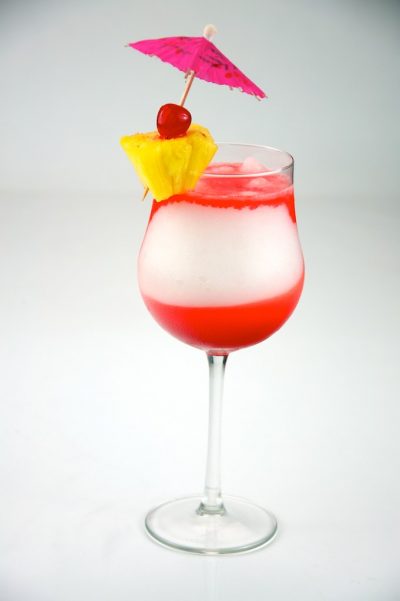 For a dose of summer sweetness and some red, white and blue aesthetics, sip on this perpetual favorite at the next big barbecue…or while kicking back to watch anything mentioned here.

Mix colada mix, rum and ice in a blender. Blend until fine and pour into a glass. Add a splash of grenadine for color. Garnish with blueberries.