The Catch: Shoplifters of the World

Director Stephen Kijak (Sid & Judy, Equal) returns with his most personal film to date, a celebration of the music—and teenage cult of—the popular rock band The Smiths. Shoplifters of the World takes place in Denver during a fateful night in 1987, the day the Smiths broke up. For longtime friends Cleo (Helena Howard), Patrick (James Bloor), Sheila (Elena Kampouris) and Billy (Nick Krause), it seems like the world might come to an end. Then, when a local record store employee takes a radio station hostage—and demands it play The Smiths all night—the four friends embark on an all-night adventure that will bring to light secret feelings and long-buried tensions between the four.

Shoplifters of the World takes a page from classic all-in-one-night, music-driven films such as Go, Empire Records and American Graffiti. The film both celebrates the wonder of youth, and the music of the era (beyond the Smiths, cults of Madonna, Janet Jackson, Grace Jones, Siouxie and the Banshees and The Cure all make cameos). The movie also offers a look at the taboos surrounding gay life at the time as young Patrick (well played by Bloor), can’t bring himself to come out of the closet. Then again, neither could Morrissey at the time. Featuring a terrific soundtrack, Shoplifters of the World doesn’t fetishize nostalgia so much as offer a glimpse into a specific time and place, and to the anxiety young LGBTQ people felt at the time. Tender, hilarious and always rocking, we recommend it for fans of The Smiths, 80s music, queer history and feeling young & free.

The Return: The Birch

The Facebook Watch/Crypt TV-based thriller returns for a second season this week, bringing with it all the thrills and giggles of the show’s first run. For the uninformed, The Birch follows a group of young adults doing battle with—get this—the spirit of a killer tree. After discovering a magical artifact in the woods, young Evie Grayson discovers the legend of The Birch…just in time for kids in the area to go missing. Season 2 offers plenty more Goosebumps style chills and snickers, as well as some thoughtful metaphor about bullying and the pressures of being a teenager. It should come as little surprise, then, that transgender writer Casey Modderno returns for this new season as well, injecting the series with feelings and situations all-too-familiar for LGBTQ viewers.

No doubt many a Queerty reader will recognize the name and face of actress Olympia Dukakis, perhaps best known for her performace as Anna Madrigal in the Tales of the City TV series, as well as for her Oscar-winning role as Cher’s mother in Moonstruck. Now the life and career of Dukakis get their own cinematic treatment in this new documentary. Now age 89, Dukakis continues to perform in films, television and on stage; Olympia aims to contextualize her workhorse mentality within her life as a feisty Greek woman. The film recounts her struggles as an “ethnic” actress in the New York theatre scene in the early 1960s, her rise to fame in plays such as The Three Sisters and Rose, and her longtime marriage to actor Louis Zorich, who managed to film several scenes for the film before his death in 2018. It’s a grand—and often very funny—tribute to an early, ally voice for LGBTQ equality, and to a performer as talented as she is intriguing.

The Event: The Unleashed LGBTQ Summit

Anyone wanting to know where the queers will gather this weekend—virtually anyway—should make note of the LGBTQ Unleashed Summit, a convention of sorts examining all walks of queer life. Virtual attendees will have the opportuinty to check out some forthocming LGBTQ films and series, music, art, fashion and even take voguing lessons. Keynote speakers include US Rep. Brian Sims, actress Carmen Carrera, NFL player Michael Sam, and queer chef Wesley Smoot. Our favorite discussion, however, goes to a special conversation with veteran gay casting director Mike Page, the man responsible for overseeing casting shows as Claws, Arrow, Animal Kingdom and Snowpiercer, hosted by none other than Queerty’s sexiest (and only) Entertainment Editor. Join us for a chat about queer representation in casting where we address issues of the portrayal of LGBTQ characters, if only queer actors should play queer characters (and the challenges involved) and how Hollywood regards gay performers. It’s a special opportunity to hear how showbiz works behind the scenes, and what the future holds for queer Hollywood. 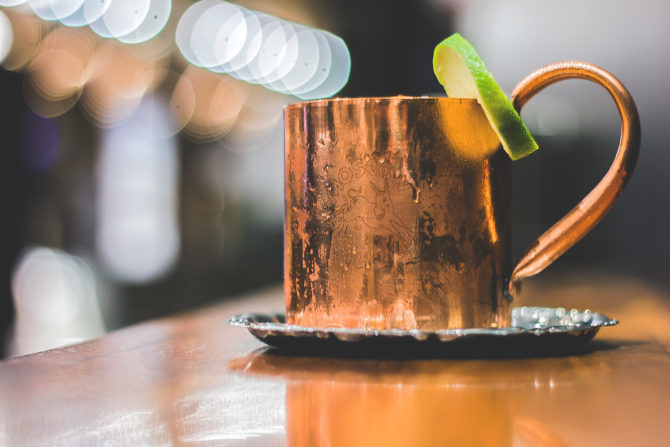 In honor of Olympia Dukakis, we offer up this week’s libation, a variation on the popular Moscow Mule: The Moonstruck Mule. This citrusy variation will, indeed, have many a sipper howling at the moon, or at the very least, sitting down for an evening with Ms. Dukakis’ films.

Mix ingredients over ice, squeezing the lime when added. Stir and serve in a copper mug.