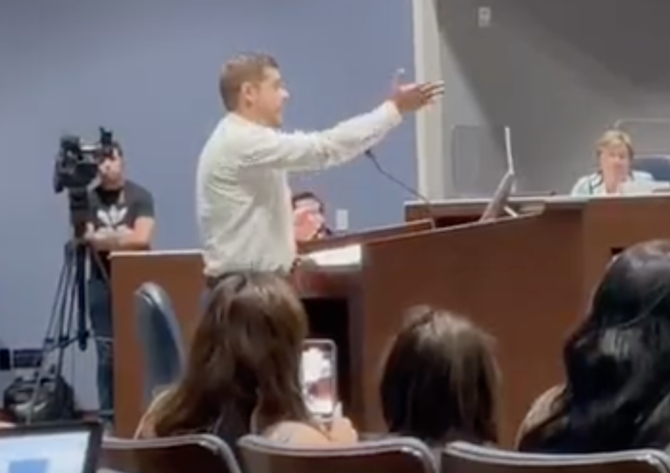 In a video posted by activist Hemat Metha, Shelley appears before the Arlington City Council during a meeting that acknowledged June as Pride month. Shelley said he’s “horrified and ashamed” that the city is recognizing Pride, and hey, “horrified and ashamed” is how most people feel when they hear Shelley speak, so it seems we’ve all got something in common.

Shelley stayed right on brand when he proceeded to say gay people deserve a punishment of death. Several people in the audience murmured in approval, and we’re going to go ahead and assume they carpooled together.

“According to God we should hate Pride, not celebrate it,” Shelley said. “I don’t understand why we celebrate what used to be a crime not long ago. God has already ruled that murder, adultery, witchcraft, rape, bestiality and homosexuality are crimes worthy of capital punishment.”

Shelley goes on to claim the LGBTQ community “hates children, hates Baptists, hates Christianity and hates God,” and called on Pride month to be eliminated.

He insisted gay people deserved to be executed.

His supported (who filmed the exchange) applauded him, but many others openly jeered. pic.twitter.com/SprktJFr4h

This is far from the first time Shelley has expressed his hatred towards queer people.

In 2019, Shelley gave a sermon in which he welcomed the death of a 75-year-old man who was accidentally run over at a Pride event in Wilton Manors.

“And, you know, it’s great when trucks accidentally go through those, you know, parades,” Pastor Jonathan Shelley said then. “I think only one person died. So hopefully we can hope for more in the future.”

Last month, he delivered a 90-minute hate-sermon to an audience of children.