The Timely: Love in the Time of Corona

Tommy Dorfman headlines this new Hulu ensemble show about a group of Los Angeles residents trying to cope with the COVID-19 pandemic. In the limited series, Dorfman plays Oscar, a queer man frustrated by the gay dating scene during the pandemic. As such, he decides to explore his own sexual fluidity, including his feelings for his female roommate/best friend, Elle (Rainey Qualley). Filmed using real-life friends, roommates and couples (including husband & wife actors Leslie Odom, Jr. and Nicolette Robinson), Love in the Time of Corona represents a timid toe in the pool of reopened production amid COVID-19, and a welcome acknowledgment of our current circumstances. Moreover, the show features a best-to-date performance from Dorfman, who displays a hereto unseen dimension as Oscar.

The latest film from controversial gay Canadian filmmaker Xavier Dolan arrives this week, certain to ignite the usual love-it-or-hate-it debates that have made him so notorious. Matthias x Maxime documents the relationship between its titular characters (played by Gabriel D’Almeida Freitas and the writer/director himself, respectively). Matt is straight and Max is gay, though both men begin to question the nature of their friendship as Max prepares to leave for a new job in Boston. Dolan’s usual themes of internalized homophobia, hypermasculinity, closet case lusting and—in particular—rage against mother figures abound, as do individual scenes of intense visual beauty and powerful acting. Does that make Dolan an auteur on the edge, or peddler of pretentiousness? You decide.

Director Quentin Lee (Gay Hollywood Dad) returns with this new, experimental sci-fi film about life during a pandemic. Lee & co-director Adi Tantimedh adopt a premise reminiscent of Invasion of the Body Snatchers to tell a story of an alien virus devastating Earth, and of a time-traveler from the future trying to prevent Armageddon. Filmed almost entirely through Zoom, Comisery occasionally feels awkward because of its format. That said, the movie does have a dark humor that gives it sense of fun, and a standout performance from actress Amy Hill (probably best known as Margret Cho’s grandma on All-American Girl). Delightful in its weirdness and ambition, Comisery further establishes Lee as a director never afraid to take a risk.

The Romance: The Lawyer

Lithuanian LGBTQ+ activist Romas Zabarauskas—who notoriously once offered nude photos of himself in exchange for donations to finish a film—returns this week with a romance that examines the ongoing European refugee crisis. The Lawyer follows Marius (Eimutis Kvoščiauskas), a lonesome attorney in Belgrade who develops an eye for an attractive cam boy, Ali (Doğaç Yildiz). When Marius learns that Ali is in fact a closeted Syrian emigre living in a refugee camp, he vows to get his crush passage to a more welcoming nation. The Lawyer examines themes of masculinity, obsession, the worldwide migration mess and evolving queer identity. The film also leans on the sexual tension between Ali & Marius, which has a real magnetism. Viewers will no doubt debate if the story they’ve just seen is a romantic dream…or a total nightmare. 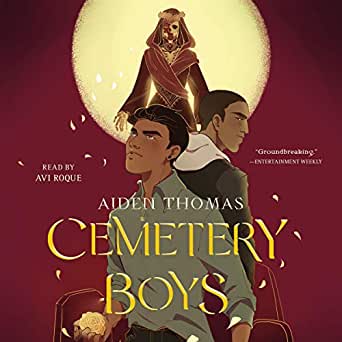 The debut novel from author Aiden Thomas lands on audiobook this week, narrated by transgender actor Avi Roque. Cemetery Boys plays a bit like love child of Coco and Beetlejuice: a transgender, Latino boy decides to prove his masculinity to his family, and does so by summoning the spirit of a murdered cousin. The spell, however, backfires summoning the spirit of a dead school bully. To remedy things, the pair must join forces to solve both murders, and an unlikely relationship develops between the two. Marvelously queer and original (to say the least), Cemetery Boys tells a story we’ve never quite seen before, and that’s never a bad thing.

The Jam: Model Child’s “Drain Me”

Yes, the song title means what you probably think it does! Queer rocker Model Child injects a hearty dose of gender fluidity and raw sexuality into this punk track which recalls the homoerotic work of Iggy Pop and early 90s grunge melancholy. Frankly, we think it’s just what the stalled rock scene needs—much as musicians like Pop, David Bowie and The Breeders reinvigorated the genre with a big ‘ole helping of gender-bending and sexual fluidity, so do Model Child’s lyrics about “when I see you shake that stuff, I gotta get off.” It’s that kind of song.

The Sip: The Drain Pipe

We’re breaking with tradition this week here at Culture Club; rather than a drink, we offer up this special shot which pairs well with a listen-though of “Drain Me.” It also pairs well with any of the other selections mentioned here, and is very easy to make.

Mix Irish cream & curacao together in a shot glass. Pour over cola. Enjoy.