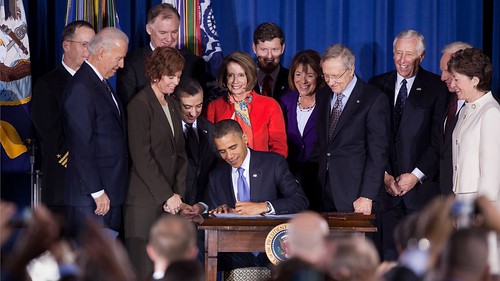 Eighteen years after its inception, Don’t Ask Don’t Tell was officially been repealed at 12:01am this morning, marking the first time in United States history that gay, lesbian and bisexual servicemembers can serve openly in the American Armed Forces.

Here is the official statement from the letter signed by Sergeant Major of the Army Raymond Chandler, U.S. Army Chief of Staff Gen. Raymond Odierno and Secretary of the Army John McHugh and sent to members of all branches of the military:

“Today marks the end of ‘Don’t Ask Don’t Tell.’ The law is repealed. From this day forward, gay and lesbian soldiers may serve in our Army with the dignity and respect they deserve. Our rules, regulations and politics reflect the repeal guidance issued by the Department of Defense and will apply uniformly without regard to sexual orientation, which is a personal and private matter.

For over 236 years, the U.S. Army has been an extraordinary force for good in the world. Our soldiers are the most agile, adaptable and capable warriors in history—and we are ready for this change…

Accordingly, we expect all personnel to follow our values by implementing the repeal fully, fairly and in accordance with policy guidance. It is the duty of all personnel to treat each other with dignity and respect, while maintaining good order and discipline throughout our ranks. Doing so, will help the U.S. Army remain the strength of the nation.”

Today will be marked by private and public celebrations throughout the nation. The Advocate reports that a bipartisan group of congressmen including Sens. Carl Levin, Kirsten Gillibrand, Susan Collins, Mark Udall, and Joseph Lieberman, along with members of HRC, the Servicemembers Legal Defense Network and the newly revealed LGBT military magazine Outserve. Later in the day, Secretary of Defense Leon Panetta will discuss the repeal at a press c

The activist group GetEQUAL has announced a number of public protests today, hoping to highlight other laws that continue to discriminate against LGBT Americans. “It has taken 17 years of hard work to remove this discriminatory policy and still our community faces discrimination and intolerance on a daily basis that this one important victory won’t fix,” says GetEQUAL’s director Robin McGehee.

Of course the repeal doesn’t mean there still aren’t unanswered questions and concerns. The fate of the some 13,000 servicemembers who were discharged while Don’t Ask Don’t Tell was enforced is still in the air. The fact also remains that though queer military men and women can now be open about their sexuality, they still can’t enjoy numerous benefits provided to their heterosexual married troop mates. And lets not forge that the trans community is still banned from serving in the military. But we should pause to celebrate our victories and thank both those who helped to enact the repeal and those who were forced to serve in silence.

“Our work is far from done, but today we pay tribute to the service and sacrifice of our patriots as we look forward to a new era of military service—one that honors the contributions of all qualified Americans who have served or who wish to serve.” said SLDN director Aubrey Sarvis. “Thanks to veterans, active duty, leaders, allies and supporters everywhere, this is a monumental day for our service members and our nation.”

Sen. Dianne Feinstein (D-CA), who was one of the few senators to vote against DADT in 1993, said in a statement, “All these years later, it is a relief to see the end of a bad law that has been with us for far too long.”

Amen to that, sister.

Subscribe to Queerty for a daily dose of #countdowntorepeal #don'taskdon'ttell(dadt) #u.s.military stories and more