Justin Elizabeth Sayre is a Pennsylvania-born raconteur-author-comic who I once devilishly dubbed “Oscar Wilde meets Whoopi Goldberg.” I’ve gotten an inside glimpse into Justin’s madcap genius, having appeared in a Wizard of Oz sketch in the Night of a Thousand Judys benefit concert they host and write, riffed with them about satirical possible sequels at their Feinstein’s/54 Below show (“Pixar presents Sex and the City 3: Journey To The Heart”), and guest-starred in their Joe’s Pub night obsessing about the culty 1986 fantasy/musical movie Labyrinth.

But enough about me.

Sayre has written plays and novels, was a writer for 2 Broke Girls and appeared on The Comeback. They are unfailingly witty and knowledgeable, which makes their imminent projects eminently worth marking calendars for. Coming up is the 10th annual Night of a Thousand Judys — an Ali Forney Center benefit honoring the late Judy Garland, taking place at Joe’s Pub on Sunday, June 5. Sayre also has a new book out about queer historical figures, From Gay To Z: A Queer Compendium.

Here is our Pride-ful chat:

Hello, Justin, Let’s talk Judy. It’s a myth that her death in 1969 caused the Stonewall rebellion, but it’s also not true that her passing had absolutely nothing to do with it. Stonewall was obviously fueled by frustration and rage, but since every revolution has subtexts, I feel that Judy’s death only six days earlier was one of them and was definitely hanging in the air. Agree?

Absolutely. She meant a lot to a lot of people, and it was a big end of an era. You could see that Bette Davis and Joan Crawford were gay icons, but Judy was much more hands-on — all those concerts for years. Gay men had much more one-on-one time with Judy than anybody else.

What would you say to a young queer who has never heard of Judy Garland? Perhaps they’re not really a “friend of Dorothy,” as the old euphemism goes.

I’d say she was an incredible movie star and a singer that maybe sounds a little of a time now, but when you listen to the enormity of her talent and the way she can convey emotion and truth in a song, there’s nobody like her.

What else was special about Judy? The way she could tear your heart out one minute, then appear indomitable the next?

Yeah — and I think that’s very queer. Everyone’s been to a brunch where someone’s talking about how their mother never loved them, and the next minute, we’re all laughing about it. That mixture of deep hurt, but with it, you have to be a survivor to get through what she’s been through, and you have to be a survivor to be a queer person in America. There are parallels there.

If someone says something bad about Judy, do you tell them off?

I do. I saw a performer in Palm Springs do a Judy set, and it was all about the drugs. I get a certain part of that, but at a certain point, you have to think, “That killed her.” I don’t like it. It reeks of being “too soon.” It’s part of the story, and if she was here, I’m sure she’d laugh about it. But it’s only part of the story. A lot of people are dealing with addictions, and I’m sure they wouldn’t like that to be everything you remember about them — that they’re a drug addict.

In the film Judy starring Renee Zellweger, our icon hangs out in the flat of a gay couple in London and gives them support over homemade snacks. Did that ever really happen?

I think it might have. I heard that story prior to the movie. I don’t know if you saw Julia on HBO Max. Last week, they had [TV chef] Julia Child in a gay bar. Everybody that we like or want to like went to a gay bar! I don’t know if that was really happening, but I’ll take it! [Laughs] But I think Judy was down. She knew a lot of gay men. She married a few. Her dad was, according to most biographies, a homosexual. She felt safe around gay men, and they adored her.

[Clarification: Judy’s director says the two gay guys were fictional but representative.] What did you think of the movie Judy in general?

People who knew her say was she was really funny, a whip. The tragedy was the part you kind of didn’t like — she couldn’t get ready or do certain things, though she had this “Let’s go for it” attitude. I think the movie didn’t do justice to how big a star she was. It played into the tropes of a tragic life. It was like, “Poor, sad, washed-up Judy Garland. Nobody wants to see her.” But she’s still Judy Garland! It’s hard to comprehend because there are 10,000 stars today, but she was a huge, huge star, not just a sad, washed-up old singer.

What’s the single most astounding thing that’s ever happened at a Night of a Thousand Judys, aside from my Tin Man impression?

It was a very good one. And you were good at Night of 1000 Stevies the other night, too [celebrating twirling songstress Stevie Nicks].

Thanks. I’ll do Night of a Thousand anybodys.

At the same Night of a Thousand Judys you were at, Molly Pope sang “Chicago,” and it was heart-stopping because the audience dropped dead; she was so great.

She’s amazing. She was born too late or something. The upcoming Night of a Thousand Judys — produced by Dan Fortune and Adam J. Rosen and directed by Peter James Cook — will feature top-tier Broadway talent like Kathryn Gallagher (Jagged Little Pill), Bonnie Milligan (Kimberly Akimbo), and Nathan Lee Graham (Priscilla). What else will be special about the night?

This will be our first live one in two years. We’ll be doing an opening number, with Jason Wise choreographing, and a sketch again, and just getting back into the swing of being in front of an audience. That’s so vital, especially to Judy’s ethos, but also to the show because the show’s about an audience, about reaching people. 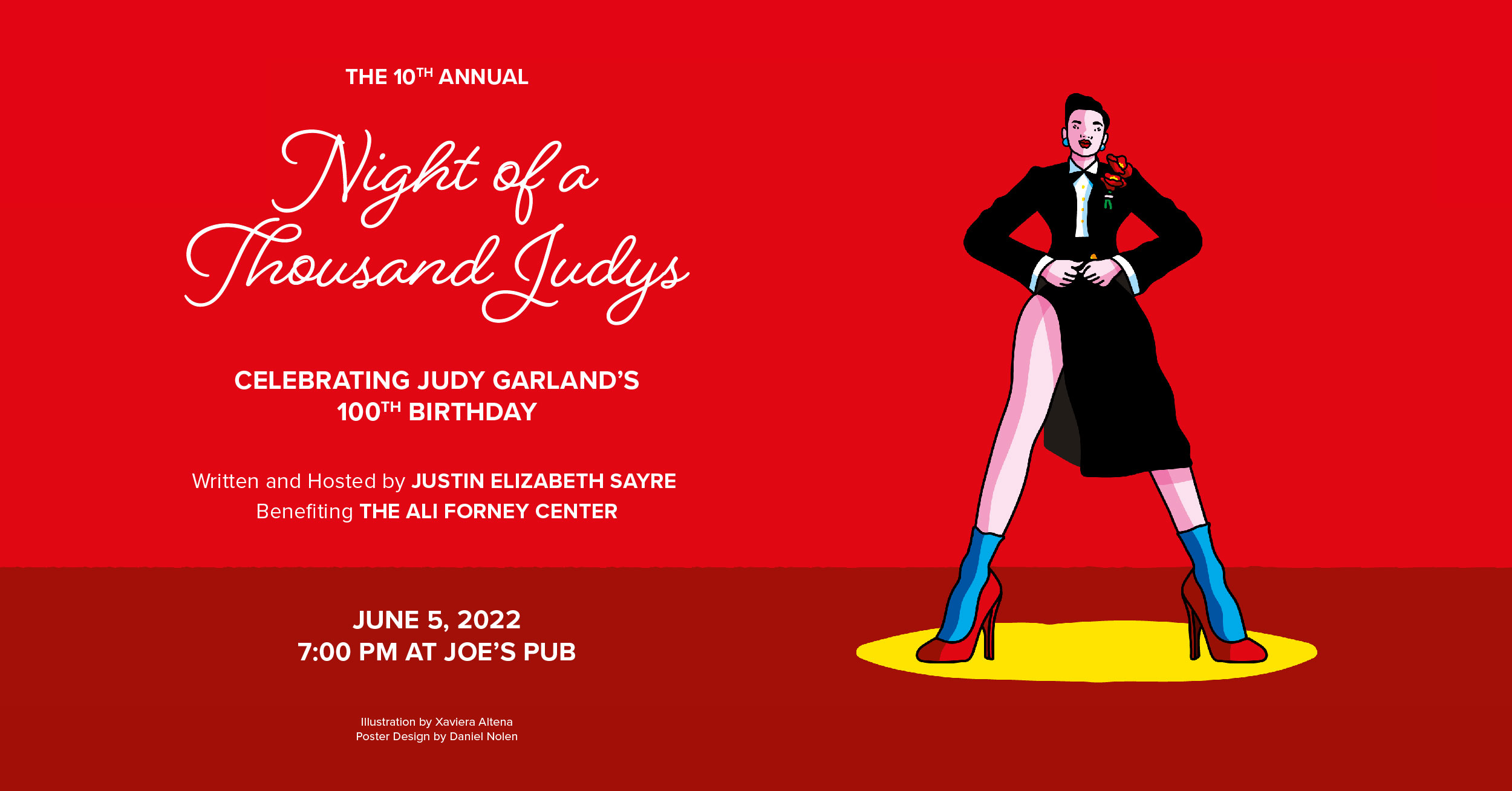 Moving on to other icons: How did you compile the list of important queer figures for your new book? Did you actively work to make it diverse?

Yes. It was important to me that it was diverse and talk about all the LGBTQ people and not just gay, white men, which a lot of these books have been written about. That was the most difficult thing for me because I took on the pressure of “This isn’t going to be good enough. I’m gonna leave somebody out, and it’s going to ruin everything.”

I’ve seen how angry people get. The writing was easy; it was the fear of the reaction to the book that kept me from finishing it or kept me worrying. Then I had to change how I approached the book, and that’s why it begins with an apology, saying that this is one attempt at one time. This is a jumping point. This isn’t authoritative. It’s not, “If you’re in this book, you matter, and if you’re not, you don’t.” This is a gift. Take this and run with it and see who else you want to add.

Who’s your favorite LGBTQ icon of all time?

I have an Oscar Wilde tattoo on my forearm. It’s Oscar Wilde’s cell number.

You mean the number of his cell in prison or his cell phone number, lol?

In prison. I had it done the moment Trump was elected. It’s very symbolic. Also, everything in my room is Divine. I have posters, a window card from Neon Lady, throw pillows …

I adored Divine too. She was a punk Liz Taylor. Is there an icon you included that you didn’t know about before, but learned about while researching the book?

Yes. Lady Java. She was a drag performer and trans woman performing in L.A.. She got arrested for her act. People like Redd Foxx stood up for her, and she became an early gay/trans icon for standing up for the right to perform in our own way.

Did I make the cut? You had said I was in it, then I wasn’t in the galley, but then you swore I was being put back.

Yes. You’ll be in the second printing in about a month.

And I’m sure you took out someone relatively unimportant like Oscar Wilde to make room for me. [We laugh] Do you ever pay the price for being witty and informative? Do people think you’re a know-it-all? Or maybe that you’re not sexual? I’m speaking from experience.

I hear that. Yes, I think it’s nonsexual.

They desexualize you because you’re witty?

Yes. And I really resent that because I’m great in bed.

What a waste! Do people ever tell you to shut up? Some folks are threatened by a lot of information.

Well, I never want you to stop. So, tell me: What, to you, is the biggest problem plaguing the queer community today?

It’s the problem everybody’s facing, which is that we’re all being trained towards conformity, and that comes from all the social media, all the constant images of what you’re supposed to be and do, so we ultimately end up treading on the same line.

It’s also a weird dichotomy of people wanting to be individuals but also wanting to be in commercials, which is most of what Instagram is. “Look at this product I got for no reason.”

One thing I wish queer people would get back to is unabashed creativity in how they live and are. The bravery of people making art in the ‘80s and ‘90s — there were no rules, and people were trying to invent new ways of being. But we’re all falling into a bit of a rut because we’re allowing other things to dictate who we are, rather than take the lead and define who we are for ourselves.