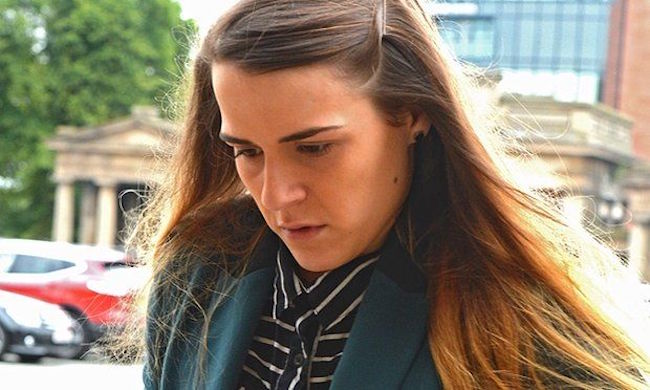 27-year-old Gayle Newland made headlines — some would say sensationalistic headlines — in 2015 after people discovered she’d pretended to be a man in order to trick her female friend into having sex with her.

Related: Lesbian Stands Trial For Impersonating A Man And Tricking Woman Into Having Sex With Her

Following a retrial, Newland has been sentenced to six and a half years in prison.

She was originally convicted in September 2015 and sentenced to eight years, but was freed on appeal last fall.

At a retrial at Manchester Crown Court last month, the jury found her guilty of three counts of sexual assault by penetration.

Upon hearing the verdict on Thursday, Newland cried and wailed, stamping her feet and shrieking, “No!”

“We love you, Gayle,” her mother cried as she was taken into the cells.

Newland created a fake online profile for a man she named Kye Fortune, a male persona she created when she was 13 years old. She hid behind the Kye Fortune identity while she communicated with girls in online chat rooms and eventually created profiles for Fortune on MySpace and Facebook.

The victim, whose name has been withheld for legal reasons, testified that she struck up an online relationship with Fortune on Facebook unaware that she was being catfished.

After two years of cyberdating, they began to meet in person and have sexual encounters and were even engaged at one point, but the complainant never saw Kye.

She willingly agreed to be blindfolded for the duration of all of their meet-ups because she was led to believe that Fortune was recovering from treatment of a brain tumor and did not want her to see him.

Related: Woman Gets Eight Years In Prison For Impersonating A Man To Have Sex With Another Girl

“Every time I met up with Kye Fortune, I either had the mask on already or he would wait outside the door and I would put it on,” said the victim in court.

According to testimonial, the victim wore the blindfold for over 100 hours while the pair hung out — taking drives, sunbathing, and even “watching” films together.

The victim swears she had no idea she was having sex with Newland instead of the non-existent “Kye,” even though both shared the same birthday and had the exact same university courses.

She wouldn’t have consented if she’d known.

Newland has been diagnosed with a host of mental disorders including gender dysphoria and Asperger syndrome.

Since the first trial, she’s looked into professional help in order to deal with “significant and long-term difficulties.”

She also suffers from anxiety, OCD, depression, and eating disorders.

Judge David Stockdale QC acknowledged that Newsland suffered “significant psychiatric and psychological disorders,” but said those problems “did not give you license to fabricate and mislead as you did.”

“This was a deceit of such subtlety and cunning in its planning and was a deceit, from your point of view, so successful in its execution that an outsider unaware of the full history of the case might find it difficult to comprehend. But truth can sometimes be stranger than fiction. The truth, the whole truth, here is as surprising as it is profoundly disturbing.”

According to DC Gareth Yates from Cheshire police: “The investigation was highly unusual and complex, garnering a lot of interest due to the circumstances, but it is important to remember that there is a victim at the heart of all of this.”

“It is unfortunate the victim had to go through another trial, but today’s result again reinforces the gravity of this crime.

This was a highly elaborate deception where Newland abused the trust that the victim had in her. She has been extremely upset by what happened and there is no doubt that there will be a lasting psychological impact on her. The victim bravely took to the stand again for a second time and I would like to thank her for her continued cooperation throughout the investigation.”