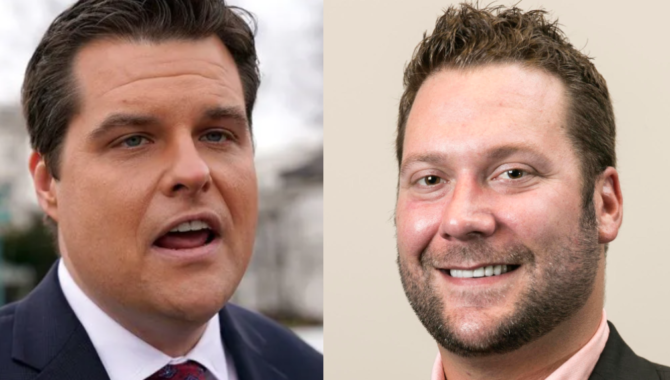 Another week, another look at the walls closing in on Republican Congressman Matt Gaetz. On Monday, former county tax collector and Gaetz associate Joel Greenberg pleaded guilty to six federal charges, including child sex trafficking and wire fraud. It’s got to be a pretty nerve-wracking development if your name happens to be Matt Gaetz.

Greenberg was first reported to be changing his plea to guilty late last week, and officially entered it today before the U.S. District Court for the Middle District of Florida in Orlando.

He has also promised full cooperation with federal investigators’ probe into whether Gaetz, too, was involved in child sex trafficking.

In return for his guilty plea and full cooperation, 23 additional charges that were previously brought against Greenberg were dropped. He faces a minimum of 12 years in prison, but CBS reports the judge has authority to reduce his sentence based on his cooperation.

In his plea agreement, Greenberg admits to acting as a “sugar daddy” and paying young women for sex, including a minor. He also admits he “introduced the minor to other adult men, who engaged in commercial sex acts with the minor in the Middle District of Florida,” as per the plea.

While the plea does not mention Gaetz or any other men by name, the Florida representative is believed to be among them.

Outside the hearing, a plane carrying a banner reading “Tick Tock Matt Gaetz” was seen circling, causing the phrase to trend on Twitter:

Here’s the reaction of Fritz Scheller, Joel Greenberg’s attorney, when asked what he thought about an aircraft above the federal courthouse in Orlando that pulled a banner that said, “Tick Tock, Matt Gaetz.” pic.twitter.com/gvUINwgYH9

Tick Tock Matt Gaetz — and MANY toxic men abusing privilege to harass younger women. #WeSaidEnough to harassment, discrimination, bullying and abuse from conservatives, moderates and so-called progressives (who are actually regressives). You won’t hide behind your power forever!

Now that Greenberg's plea deal has been executed, and we see a "Tick Tock Matt Gaetz" banner flying, do you suppose Gaetz will hold a support rally out front of a "Hello, Kitty" store?

Gaetz, who has not been charged with any crimes, has strongly denied the allegations, even telling a Republican group over the weekend that he’s “being falsely accused of exchanging money for naughty favors.”

He then strangely went on to compare his situation to earmarks. “Yet Congress has reinstituted a process that legalizes the corrupt act of exchanging money for favors, through earmarks,” Gaetz told the group, “and everybody knows that that’s the corruption.”