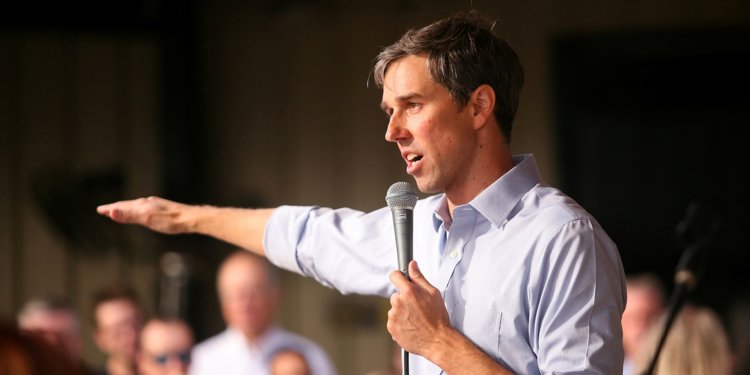 For a while, Ted looked like he was unbeatable in Texas. But after the dismal failure of his campaign for the White House, it seems he could be vulnerable. In 2 months time, we may have a new Senator-elect from Texas, a man who has excited his state and the country like no one since perhaps President Obama.

That man is the newly minted national sensation, Beto O’Rourke, and here are the reasons we gays should be behind his campaign in droves.

He’s adamantly pro-gay rights, saying in April that “together, we will work to ensure our state finally has a voice in the Senate who is committed to passing the Equality Act, standing up to discriminatory and dangerous measures like SB6, supporting transgender troops serving our country across the globe, ensuring a caring same-sex couples can open their home to one of Texas’ 30,000 children in foster care and continuing the daily fight for equal justice under law in this country.”

On the opposite end of the spectrum is Ted Cruz, a man who has literally built his career fighting against our rights, saying on the record that he believes homosexuality is a choice and that we should pass a federal constitutional amendment to ban marriage equality.

Beto also stands with the progressive movement across the board, a rarity among Texas Dems. Despite running in the conservative bastion that has traditionally been Texas, he’s been unabashed about his support for impeaching Trump, legalizing pot, Medicare-for-all, immigrants, woman’s right to choose and the environment. He doesn’t have a pollster or triangulates his positions the way Cruz does. He’s the real deal.

Ok, so you ask why this matters. Fair enough. Well, it certainly shows he has a sense of humor, rejects the mainstream, and knows what it’s like to be different and embrace it. Before he was in politics, Beto was a bassist for the punk band Foss. He posed for the cover of their EP, “The El Paso Pussycats” wearing a dress, which Ted has been trying to attack him with recently. I can’t think of anything that meets the definition of “poetic justice” more than the most conservative anti-gay member of the U.S. Senate replaced by a punk in a dress who looks like Kurt Cobain in the early 90’s.

Let’s face it, sexy matters in politics. We want someone in the Senate who excites us and inspires us with their charisma. Beto’s got the Kennedy aura going on, a little Jack but mostly Bobby. He shows the energy that our country needs right now. Ted represents the past (seriously, like the 1950s past); it’s time to forward.

At a time when politics, after Citizens United, is largely controlled by special interests, Beto isn’t taking a dime of money from Super PACS. Cruz is, of course, a corporate tool, but despite this disadvantage, O’Rourke is still outraising him–by a lot. In the most recent fundraising quarter, he raised $10.4 million, doubling Cruz’s total of $4.6 million. A ton of dark money will inevitably flow into the race in these final weeks as they try to keep the seat in GOP hands, but Beto’s got the momentum and grassroots support of the people.

While Ted Cruz makes pop culture references to Princess Bride and The Simpsons to try to be cool, Beto talks like a normal human being. In an era where people are craving authenticity, Beto doesn’t shy away from talking honestly, the way he did recently when he shared his opinion at a town hall on footballers taking the knee, which went viral in a YouTube video. Oh, and he’s actually cool without even trying, skateboarding into the parking lot of a Whataburger the other day. A Senator who can skateboard?