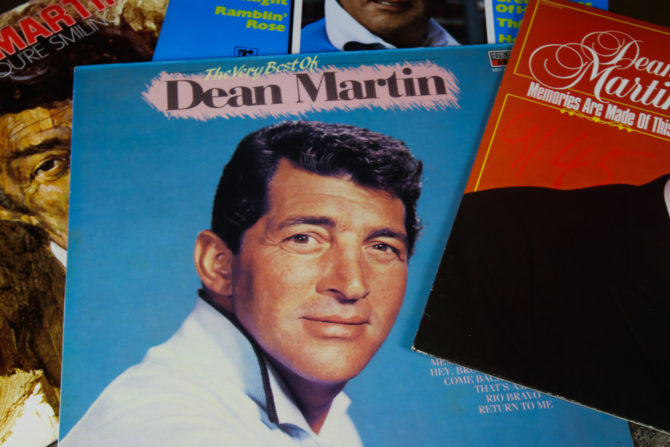 This just in: An alleged nude photo of iconic ’50s crooner Dean Martin just sold for nearly $5000 on Ebay.

Several photos, purportedly taken in in the early 1950s, were put up for auction. One of them appears to show Martin and comedian Jerry Lewis (a.k.a. the “King of Comedy”) showering naked together. Another appears to show them relaxing with two other naked guys in a steam room.

The seller’s note on the shower photo reads:

Photo from the Frank Branda collection who was a close friend and worked for Jerry Lewis in the 1950s & 1960s. The Evans Archive logo is of course, not on the actual photo and purposely covers Dean’s privates.

It is unclear if the photos are authentic, but for the sake of whoever dropped almost $5K on them, we certainly hope nobody was duped.

Cropped versions of a couple of these photos can be found on Pinterest, although in poor quality jpegs, apparently scans of photos that ran in a magazine or newspaper at the time. I wouldn’t exactly call Pinterest a reliable source, but if the captioning is accurate these shots were taken in 1952 at the Palm Springs El Mirador Hotel.

I’m the first to call “fake” on photoshopped images found on the internet, but these new photos are very clear. The only pixel anomalies are the results of my attempt to remove the eBay seller’s name, which was strategically plastered across key nether regions, including Dean Martin’s uncut dong.

Naturally, Twitter is in an absolute tizzy over the whole thing…

Sometimes you’re wake up not sure what the day holds, then you see a full nude photo of Dean Martin and Jerry Lewis showering together and you think “well I guess anything is possible.”

I don't think I'll ever be ready for the "Dean Martin and Jerry Lewis naked in a shower" discourse.

@sleepyserenade I doubt I'm the first to ping you, but did you see the Dean Martin nude pics on ebay yet

I wasn't expecting nude photos of Dean Martin on eBay to end up livening classic film Twitter tonight, but here we are.

Someone is selling a nude photo of Dean Martin and Jerry Lewis on eBay that I was not prepared for while browsing their store. pic.twitter.com/oetRzRqjrv

Someone was selling (it sold for $4,000.00) a nude photo of Dean Martin on Ebay (Google it) & man I forgot manscaping wasn't a thing back then.

Got a Facebook ban for attempting to post a photo of Dean Martin and Jerry Lewis naked in the shower together, holding their not unimpressive members.
That's not something I ever expected to type.

None of you cowards better unfollow me for retweeting a nude photo of Dean Martin and Jerry Lewis. This is an important piece of history and cannot be ignored

I can't believe the Dean Martin nude sold for 4k. Honestly, I'm on a budget so I just right-clicked.