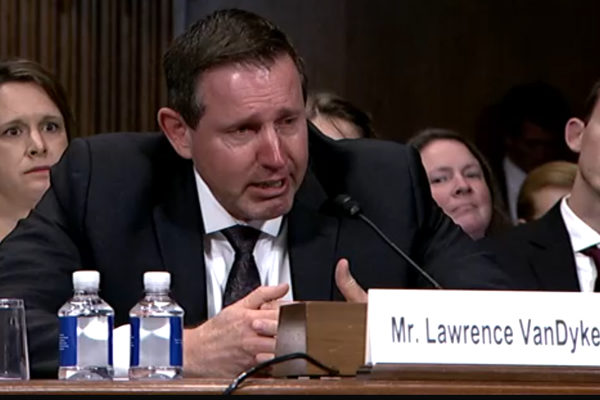 Get ready for some Kavanaugh 2.0…

Trump’s nominee for the 9th Circuit Court of Appeals Lawrence VanDyke broke down sobbing before the Senate Judiciary Committee yesterday when asked about a letter from the American Bar Association saying he was “not qualified” for the job due to his well-documented hated of LGBTQ people.

It continued: “Mr. VanDyke’s accomplishments are offset by the assessments of interviewees that Mr. VanDyke is arrogant, lazy, an ideologue, and lacking in knowledge of the day-to-day practice including procedural rules. There was a theme that the nominee lacks humility, has an ‘entitlement’ temperament, does not have an open mind, and does not always have a commitment to being candid and truthful.”

46-year-old VanDyke is closely affiliated with the extreme antigay hate group Alliance Defending Freedom, which has lobbied to make being LGBTQ illegal and called for the sterilization of trans people. The group has also linked homosexuality to pedophilia, warned that the evil “homosexual agenda” will destroy Christianity, and said the legalization of same-sex marriage in America has caused “deviant sexual practices” among straight people.

Asked whether he ever said LGBTQ litigants should not be treated fairly, VanDyke sniveled, “I did not say that! I do not believe that! It is a fundamental belief of mine that all people are created in the image of God, and they should all be treated with dignity and respect.”

"It is a fundamental belief of mine that all people are created in the image of God, and they should all be treated with dignity and respect."

VanDyke added that he was “disappointed, shocked, and hurt” when he first read the ABA’s letter and claimed he was “still processing” the whole thing. He was also quick to note that one of the ABA raters had donated to his opponent when he ran for a state judiciary race.

What he left out was that the $150 donation was made five years ago and the member who made it recused themselves from the vote that declared him unfit to be a judge.

Related: Guess which two SCOTUS justices were caught cozying up with leaders of an antigay hate group