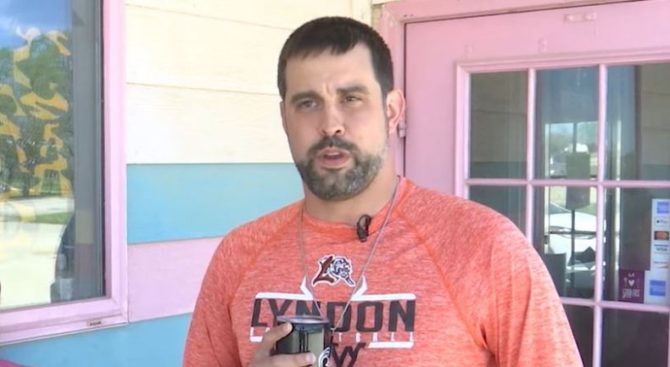 A Kansas state Representative is facing charges of misdemeanor battery after he was caught on tape throwing a homophobic temper tantrum in a classroom that ended with him turning violent against a male student.

In one video shared with The Star, Samsel tells students about “a sophomore who’s tried killing himself three times,” adding that it was because “he has two parents and they’re both females.”

“He’s a foster kid. His alternatives in life were having no parents or foster care parents who are gay,” Samsel tells students. “How do you think I’m going to feel if he commits suicide? Awful.”

But it was 36-year-old Samsel’s treatment of one male student in particular that was most unnerving. Multiple videos show him chasing the kid around the classroom before aggressively grabbing him from behind.

“You’re about ready to anger me and get the wrath of God!” he shouts. “Do you believe me when I tell you that God has been speaking to me?”

Then he pushes the kid away. As the student runs for safety, Samsel shouts, “You should run and scream!” Later, he tells the other students, “Class, you have permission to kick him in the balls.”

Parents of students in the room also allege that Samsel kneed the kid in the groin shortly before directing others to do the same. Another video allegedly shows him hovering over the kid moments after assaulting him. “Did it hurt?” he asks.

Then he asks the kid why he’s crying and directs another student to “check his nuts for him” before telling the kid to “go to the nurse, she can check it for you.”

In response to the videos, superintendent Ryan Bradley said Samsel is barred from working for the school district. Kansas City Mayor Quinton Lucas responded by saying Samsel “shouldn’t just be terminated from substituting. He should be blocked from being around kids.”

What the hell is going on with the #KSLeg this session? He shouldn’t just be terminated from substituting. He should be blocked from being around all kids. https://t.co/WkWTBanx8h

And here’s where the story gets even crazier. Because according to Samsel, the whole thing was a stunt that was “all planned.”

“Every little bit of it. That’s right,” he said in a Snapchat post. “The kids and I planned all of this to send a message about art, mental health, teenage suicide, how we treat our educators and one another. To who? Parents. And grandparents. And all of Wellsville.”

He added that the incident was “exactly what God planned. The kids were in on it. Not all of them. But most.”

He repeated the claims in an interview with a local news outlet.

Samsel was first elected to the Kansas House of Representatives in 2018. Prior to last week’s incident, he was best known for voting against ending an exemption for spouses from the state’s sexual battery law.

In true GOP fashion, none of his Republican colleagues have commented on the incident or said whether Samsel will be censured, expelled, or face any kind of punishment in the legislature.