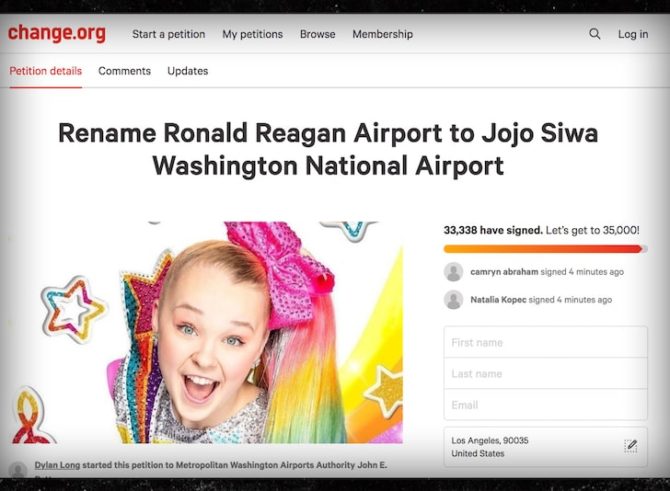 Social media personality JoJo Siwa has gone public with her support for naming an international airport after her.

Siwa told TMZ last week that she has endorsed–and signed on to–a petition to rename Ronald Reagan International Airport after her. The airport serves the greater Washington DC area.

“I obviously am on board with it,” Siwa said. “This would be the sickest thing ever. I would take every flight out from there. My mom told me to go sign the petition. It’s the best idea I’ve ever heard in my life.”

Related: Ronald Reagan was a godawful President. With ‘The Reagans,’ Matt Tyrnauer explains why.

The petition was started by a Siwa fan named Dylan Long who hoped to garner at least 75,000 signatures. At the time of this writing, the petition has over 54,000 people signed on.

When pressed for more details as to why she deserved the airport more than Ronald Reagan, Siwa demurred. “You know what I know, he’s got an airport,” she said of the former President.

Frankly, we’re all for renaming the Ronald Reagan International Airport. While the notoriously homophobic Republican Party touts Reagan as something of a hero, his record suggests otherwise. Reagan notoriously ignored the HIV/AIDS crisis which claimed the lives of thousands of LGBTQ people in the United States even before 1985 when it became a full-blown epidemic. Even then, Reagan suggested abstinence as a treatment. He also opposed anti-discrimination protections for queer people. Reagan’s policies of deregulation and “trickle-down” economics also had a horrible effect on the US economy, resulting in a lower standard of living for middle and lower-class American families.