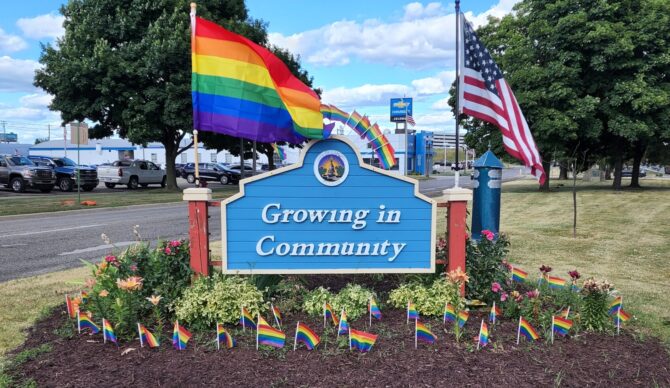 Even after half a dozen attacks on the rainbow flag, one Michigan neighborhood is showing that our community won’t back down to violence.

Video out of Lansing, Michigan early Tuesday morning shows a man dousing a Pride flag in gasoline before lighting it on fire — and judging from the flash, nearly taking himself with it.

The Pride flag display has been set up alongside the American flag around the sign between Lansing proper and the Eastside Lansing neighborhoods since Pride month began.

This isn’t the first time this Pride display has been targeted. This month alone, it’s reported that Pride flags around the sign have been vandalized or stolen at least five times.

In one such incident, a man actually sawed through a steel lock just to steal one of the flags.

Ryan Kost, a board member of Lansing’s Eastside Neighborhood Organization, said the community won’t be giving up any time soon.

“I think there’s a lot of disappointment that is going around,” he said. “Maybe some frustration, anger. I can tell you that I’m a hopeless optimist. I am optimistic every time we put a flag up that it won’t happen again.

Since the incident, neighbors have quickly rallied to donate money and replacement flags for the display.

Come Tuesday evening, a new Pride flag was flying high by the sign once again.

Watch a local resident describe the situation on the scene: