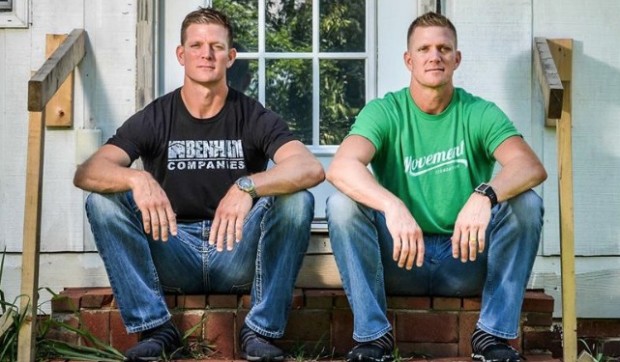 Question: What do you get when you mix toxic masculinity with heteronormativity then add a dash of Christian extremism? Answer: The Benham Brothers!

They twinsies have just penned a new op-ed about standing up for what you believe in that’s tinged with their usual brand of hate and homophobia.

“Submission to political correctness creates weak men,” they write. “Men who lack the courage to stand for what they believe, simply for fear someone might get ‘offended.'”

Which is why, the continue, they are so fond of Eagles quarterback Carson Wentz.

“This dude refuses to pander to limp-wristed political correctness, standing not only for his Christian faith but also for his hunting dog!” the brothers say.

They point to a tweet Wentz sent to a fan after they questioned him about a photo he posted featuring dozens of dead birds he had shot from the sky:

Appreciate that, but offensive and controversial? Two of the main things I tweet about are Jesus and hunting. That’s what I’m passionate about and that won’t ever change! When you love something, you talk about it! Stay convicted about it and don’t worry what others think! https://t.co/3XsxU0kybC

“Wentz is spot on,” the twinsies say. “It’s vital today, especially for those who desire to live faithfully according to the moral teachings of Christ, to stand with courage for what you believe and not worry about what others think.”

Then they add, “Of course, all this is in the context of speaking the truth in love when taking a stand.”

Because nothing demonstrates more love than aggressively calling people you disagree with “limp-wristed” in a blog post.