Bette Midler has defended herself after she faced a wave of criticism for posting a tweet that many people perceived as transphobic.

On Monday, Midler tweeted, “WOMEN OF THE WORLD! We are being stripped of our rights over our bodies, our lives and even of our name! They don’t call us ‘women’ anymore; they call us ‘birthing people’ or ‘menstruators’, and even “people with vaginas”! Don’t let them erase you! Every human on earth owes you!”

That tweet prompted tens of thousands of replies. Many said Midler was falling for anti-trans arguments about the erasure of women. Others highlighted the importance of using language that’s more inclusive of trans and non-binary people.

Yesterday, reacting to the furor, Midler tried to put her comments in a greater context. As suspected, she confirmed that she had been reacting to an opinion piece in the New York Times. Written by Pamela Paul, that article criticized the use of terms such as “birthing people” and “menstruators”.

Midler tweeted, “PEOPLE OF THE WORLD! My tweet about women was a response to this fascinating and well written piece in the NYT on July 3rd. https://tinyurl.com/2p9dw2th. There was no intention of anything exclusionary or transphobic in what I said; it wasn’t about that.”

She went on to say, “It was about the same old shit women – ALL WOMEN – have been putting up with since the cavemen. Even then, men got top billing. But seriously, folks, if anyone who read that tweet thinks I have anything but love for any marginalized people, go to Wikipedia and type in my name.

“I’ve fought for marginalized people for as long as I can remember. Still, if you want to dismiss my 60 years of proven love and concern over a tweet that accidentally angered the very people.

“I have always supported and adored, so be it. But the truth is, Democracy is slipping through our fingers! I’m all in on trying to save Democracy for ALL PEOPLE. We must unite, because, in case you haven’t been paying attention, divided we will definitely fall.” 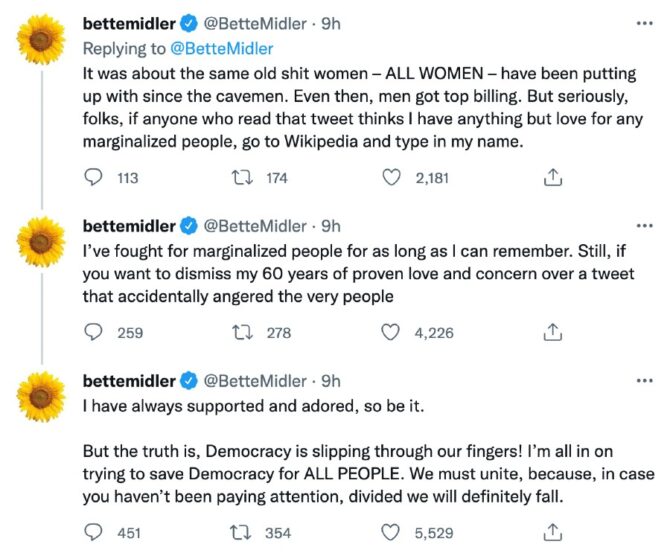 Will Midler’s clarification dampen down the controversy? That’s unlikely. Many LGBTQ advocates have described the New York Times op-ed as transphobic and are dismayed that Midler praised it.

Bette, I’m the first transgender Native American elected to a state legislature in the US. People against trans women are using your tweet as proof that even liberals are against the trans community. If that isn’t the case, specifically say trans men and women are men and women

Bette, it’s important that you realize how harmful that article is to the trans community. As you have said, you have been a great ally for 60 years, but a part of being an ally is listening to those who you support when they say there is a hurtful take or language. Please listen

Yes, I see your record. Yes, I believe you didn’t mean it to offend. But it DID offend. It hurt people, and this is basically putting the blame on them. This isn’t an apology to the people you hurt. People make mistakes; what shows your character is how you address them.

Midler wasn’t the only person backtracking on trans-related comments yesterday. Singer Macy Gray appeared on the British chat show, Piers Morgan Uncensored on Monday and waded into the gender debate.

Gray said to Morgan, “Everyone’s gonna hate me but as a woman, just because you go change your (body) parts, doesn’t make you a woman, sorry.”

Morgan replied, “Right, you feel that?”

To which Gray responded with, “I know that for a fact.” She added, “Being a little girl is a whole epic book, you know? And you can’t have that just because you want to be a woman.

“I don’t think you should be labeled transphobic just because you don’t agree.”

This earned praise from, among others, Harry Potter author JK Rowling, who tweeted, “Today feels like a good day to ensure I’ve bought @MacyGraysLife’s entire back catalogue 🔥”

Rowling included a screenshot of Gray responding to a well-known UK trans activist, India Willoughby, claiming she was only speaking the “truth”.

Yesterday, according to the Daily Mail, Gray tweeted and then deleted the following message: “I got nothing but love for lgbt+ and transgender communities. I’ve been a supporter since day one and never a fake one. my statement on piers morgan was GROSSLY misunderstood. i respect everyone’s right to be whoever they wana be.” 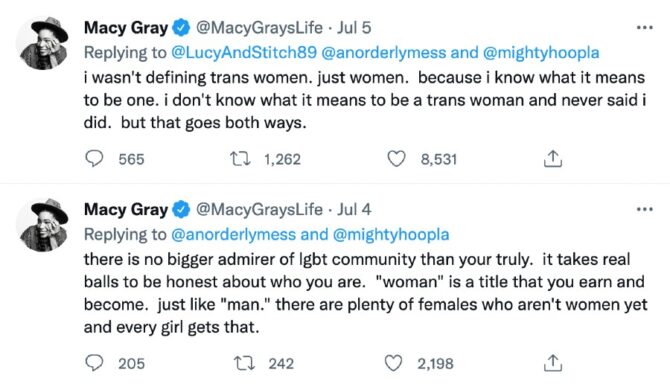