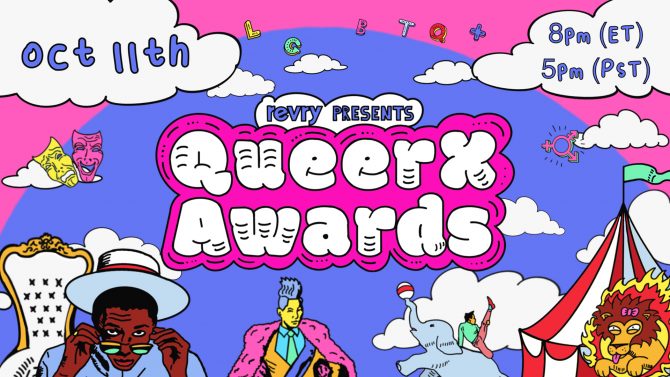 Revry, the largest LGBT-first streaming media network, has announced the broadcast of the QueerX Awards 2021. The show will stream at 5 PM PST/8 PM EST on October 11, 2021, just in time for National Coming Out Day.

The streaming special marks the month-long international film festival competition, QueerX, and will feature dynamic music performances, screenings of the winning films, and the star-studded Revry Visibility Awards. Comedians Drew Droege and Raneir Pollard will host the show, which will also feature appearances by Dwyane and Zaya Wade, Peaches Christ, and Patton Oswalt.

In addition to the awards for the films, Revry will also present this year’s Visibility Awards to Bowen Yang, MJ Rodriguez, Cassandra Peterson and Erica Wheeler.

Have a look at the trailer below, and mark the calendar.