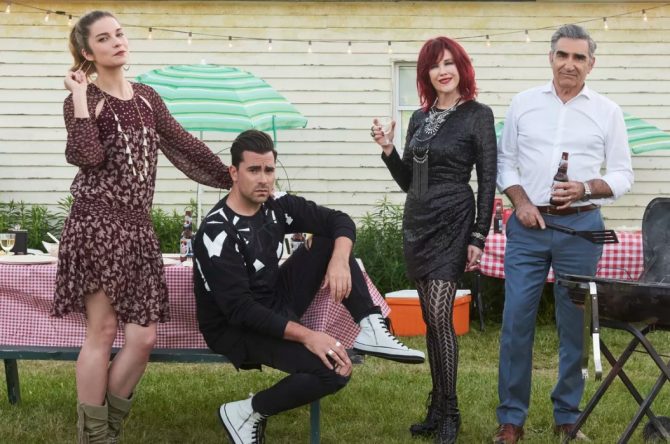 It took several glorious seasons of Pop TV’s Schitt’s Creek, the brainchild of Daniel and Eugene Levy, for US audiences to fully catch on to the show’s brilliance. And just as soon as America re-upped its love affair with Catherine O’Hara thanks to her absolutely genius run as “Moira,” the wig-loving matriarch of the Rose family, the show is leaving the airwaves, or streamwaves, or however you crazy kids watch TV now.

But the news isn’t entirely bad.

In a written statement, the show announced it would come back for a sixth season (yay!), but that it would be the series’ final one (aww).

Related: Dan Levy is proving the world is ready for gay intimacy on TV

Throughout its five seasons, the often-zany series helmed by breakout star Daniel Levy has taken on some frank and unconventional queer storylines. Daniel’s character, “David,” has been celebrated as one of TV’s first and most visible pansexual characters.

And despite being a screwball fish out of water comedy, the show has handled its more earnest endeavors with total class.

A particularly emotional moment came in a season 4 episode in which David’s boyfriend, “Patrick,” serenades him with an acoustic cover of Tina Turner’s “Simply the Best.” We’re not crying, you’re crying:

Notably, none of those storylines have involved homophobia, a point Levy clarified to an audience at the Vulture Festival last year:

“I have no patience for homophobia,” he explained. “As a result, it’s been amazing to take that into the show. We show love and tolerance. If you put something like that out of the equation, you’re saying that doesn’t exist and shouldn’t exist.”

Read the statement from series creators (and real-life father and son duo) Dan and Eugene Levy below:

“We are so grateful to have been given the time and creative freedom to tell this story in its totality, concluding with a final chapter that we had envisioned from the very beginning. It’s not lost on us what a rare privilege it is in this industry to get to decide when your show should take its final bow. We could never have dreamed that our fans would grow to love and care about these characters in the ways that you have.

We are all so excited to begin shooting these last fourteen episodes and can’t thank you enough for the overwhelming love and generosity you’ve shown us. We hope you continue to enjoy the rest of our fifth season as we prepare to shoot our sixth!”

Seasons 1-4 of Schitt’s Creek are available to stream on Netflix.

We’ll leave you with this iconic moment from season 1, which finds Moira having booked a wine commercial at “Herb Ertlinger Fruit Wines”: