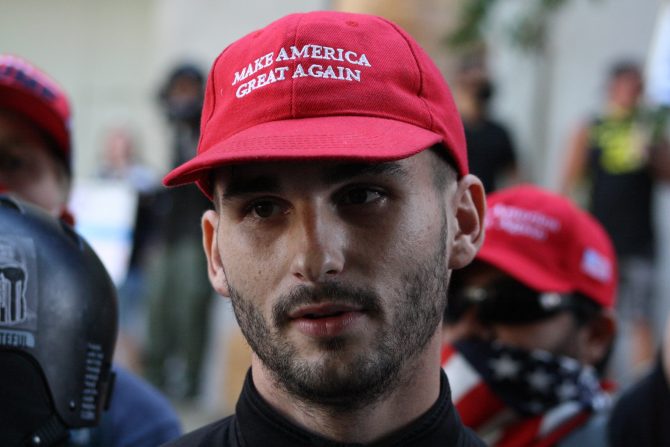 If you weren’t already familiar with the Proud Boys, the far-right group known for spouting white nationalist, anti-Muslim and misogynistic rhetoric, before last night, you probably are now. But you may not know they’re named after a hit Broadway musical.

During Tuesday night’s presidential sh*t storm, when given the opportunity to denounce white supremacy, Donald Trump instead delivered this message: “Proud Boys, stand back and stand by.” The group instantly started celebrating the callout online.

“To say Proud Boys are energized by this is an understatement,” Megan Squire, a computer science professor at Elon University in North Carolina who tracks online extremism, told NBC. “They were pro-Trump before this shoutout, and they are absolutely over the moon now. Their fantasy is to fight antifa in his defense, and he apparently just asked them to do just that.”

Related: Dana Bash calling last night’s debate a “sh*t show” on live TV is all of us

There’s no getting around it — the idea that this group of extremists would feel endorsed by the president to enact violence is a terrifying prospect.

And reminding everyone that their name is, in fact, taken from the song “Proud Of Your Boy” from the 2011 Broadway production of Disney’s Aladdin does not detract from the very real threat posed to the nation.

But just so we’re all clear, that is where the name comes from, according to this guide to the org published by Wired in 2017.

So the next time you see the group rallying for Trump, clashing with protesters, or doing any number of things that may be justifiably frightening, just think of this: