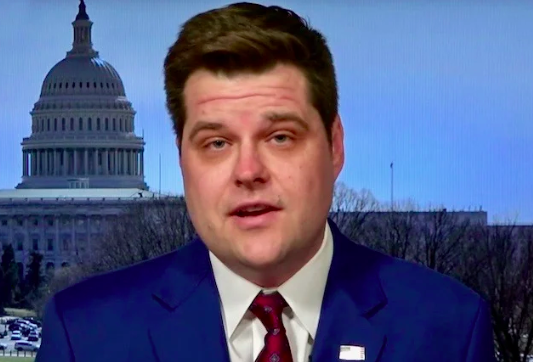 Another day, another absolutely terrible day in the press for Matt Gaetz. Not one but two bombshell reports were just dropped about the antigay senator from Florida.

First, Insider has spoken to over 20 people who knew him back in high school and–surprise!–they all say he was always a total sleaze ball.

Insider interviewed 21 of Gaetz’s former classmates this month, including alumni from his Niceville High School graduating class of 2000 and members of Gaetz’s high-school debate team. Several say they have known Gaetz since childhood, and some still live in his congressional district at the end of the Florida Panhandle. His classmates have been texting one another and posting memes on Facebook as they’ve watched and read the stream of updates about Gaetz’s sex scandal on national news. ‘Honestly it was ‘What are they going to dig up next?” said one female high-school classmate who spoke with Insider on condition of anonymity.

One of the most revealing moments in the article came from Gaetz’s former debate team buddy, Erin Scot, who said he used to do “dumb kid things” all the time.

Scot wasn’t the least bit surprised by reports that he would brag about his sexual conquests and show nude photos of women with male colleagues in Congress, saying he did the same thing at a wedding rehearsal dinner they both attended back in 2009.

Scot described a photo Gaetz shared of a woman “like she was on a bed and maybe as she’s looking at the camera like on all fours.”

“In general, it’s like he always kind of wanted, regardless of whether it was a sexual conquest or any other sort of achievement, he was very big on letting you know that he did it,” she said.

Scot’s story can be corroborated by a blog post she published back in 2010 when Gaetz first ran for state legislature, in which she called him a “smarmy womanizer”:

He may have gotten his law degree and put on a suit and tie, but behind all that he’s still the same guy who takes out his cell phone to show friends naked pictures of the women he’s recently bedded. He can come and knock on your doors, smile for your photo ops, and hold all the babies he wants, but the fact of the matter is that Gaetz is a smarmy womanizer with no intention of doing anything for the district that doesn’t first and foremost advance his political career.

Another former debate team buddy said Gaetz would threaten to use his father’s political influence to get people to do what he wanted.

“He was, like, ‘You don’t speak like that to me, or I’m going to call my dad and have him call some people at Dartmouth so your admission gets withdrawn,” the teammate told Insider.

If that wasn’t bad enough, CNN also spoke to two unnamed women who say they attended multiple parties with Gaetz in recent years, where sex, drugs, and money were frequently exchanged:

The partygoers, at times dressed in formal wear from a political event they’d just left, mingled and shared drugs like cocaine and ecstasy. Some had sex.

Gaetz, the brash Republican, liked to discuss politics, said one of the women. He behaved like a “frat type of party boy,” she said, sometimes taking pills she believed were recreational drugs.

Details of the parties, which have not been previously reported, were described to CNN by two women who attended several of them over the past few years. Both spoke on condition of anonymity.

One of the women said that she was paid for sex at one of the parties, though she declined to say with whom and said she never received any money directly from Gaetz.

Some of the parties were more low-key affairs, the other woman said. Some took place in hotel suites at the end of alcohol-filled political functions “No one ever wants to stop partying, stop drinking, once you’ve had a few glasses of champagne in you,” she said.

Gaetz declined to comment on the accusations, but he did tweet an article published by the ring-wing propaganda newspaper Washington Times article accusing a technical director from CNN of being out to get him.

“A CNN technical director said that the network employed “propaganda” to defeat President Trump in 2020, and suggested that the same thing is happening with GOP Rep. Matt Gaetz, according to the latest Project Veritas sting.”https://t.co/iCwmDaChwX