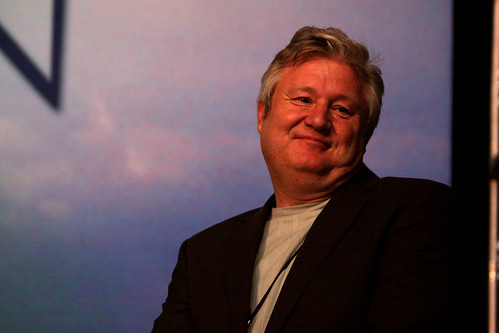 Michele Bachmann now has a snowball’s chance in hell of being elected president. Which is one reason to look back and revisit the way her husband, Marcus, has been treated by, well, us.

Then there’s his damaging “pray away the gay” therapy. The American Psychiatric Association has suggested that this kind of reparative therapy can be harmful to a patient’s mental health.

With so much ammunition, why do people spent so much time attacking the man for his lisp and other so-called “effeminate” characteristics?

Dan Savage and Cher are just two of the famous folks who (along with Queerty) called out Bachmann publicly for what they perceive as his “gayness”—that is, his perceived lack of typically masculine affect.

My heart goes out to the man— just a little, mind you—because my perceived lack of masculinity has gotten me into trouble, too. I was bullied for being a sissy throughout my school years. Less than a year has gone by since the last time someone yelled “Fag!” at me from a passing car.

So it pains me to see gay people bullying a man because he’s too effeminate (especially when, like I say, there are so many better reasons to go after him).

And it really pains me to see someone like Savage (whom I respect mightily) do it. What about that whole “It Gets Better” thing? Even within gay groups, there’s a lot of pressure on us to be “masculine”—or to pass as straight. I know I monitor my sibilant esses and animated hand gestures, although they come naturally to me.

Of course, not all gay men are like me. Each gay man is unique, like snowflakes. We’re not just gay-site bloggers and Liza Minnelli fans. We’re also firefighters and NASCAR aficionados. As a community, we’re always asking people to look past the stereotypical notions they may have about gay people … but then when someone fits those stereotypes, it seems like we’re the first to shout, “He’s gay!”

That sounds wrong to me. It runs counter to our argument that people need to trust us on the matter of our own sexuality, to respect our right to be who we say we are.

Sure, I get that there’s a certain comedy in it all: “Look at the girly man who says he’s straight!” And hypocrites deserve to be called out. But although we have proof that Bachmann is a homophobe, we don’t know that he’s a hypocrite on this particular issue. If Bachmann says he’s straight, then that’s good enough for me—you know, until a public-restroom arrest or male-prostitute scandal, I’ll take him at his word.

I mean, really, do we really want to claim him as one of our own?

Charles Purdy is the author of the book Urban Etiquette: Modern Manners for the Modern Metropolis and a longtime manners-advice columnist. In his Queerty column, he addresses issues related to social behavior. Find him on Twitter: @charlesqueerty

bring the beat in
20 comments

bring the beat in
20 comments

All about the WLW Pride Flag