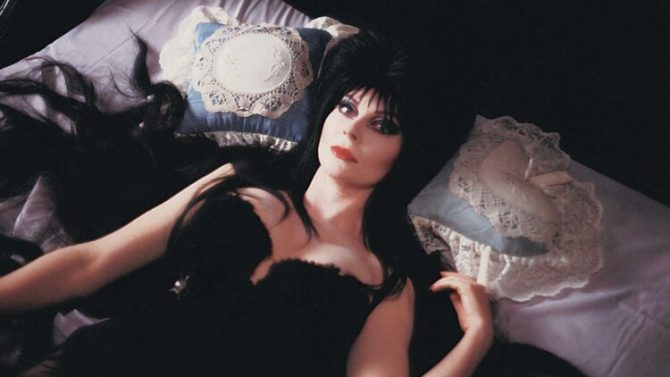 Actress, comedienne and horror icon Cassandra Peterson, best known as her alter ego Elvira, Mistress of the Dark, has officially come out of the closet.

Peterson made the confession as part of the publication of her new memoir, Yours Cruelly, Elvira. She further reveals that she and her female companion, Teresa “T” Wierson, have been in a relationship for 19 years.

Peterson first spied Wierson while working out at Gold’s Gym in Hollywood.

“Often, when I was doing my preworkout warm-up on the treadmill, I couldn’t help noticing one particular trainer — tan, tattooed, and muscular — stalking across the gym floor, knit cap pulled so low over his long brown hair that it nearly covered his eyes,” she writes. “Dark and brooding, he gave off such intense energy that when he crossed the enormous gym floor, the waters parted and people stopped in their tracks to stare.”

“He” actually turned out to be a “she.” Wierson and Peterson became fast friends, with the former even becoming Peterson’s trainer. The pair took their relationship to the next level several years later, following Peterson’s divorce from Mark Pierson, her husband of 25 years.

Related: Elvira teams up with the gays for free Halloween virtual screenings

Peterson recalls the magnetism one night after a movie where she couldn’t resist the urge to kiss Wierson. The move shocked both women.

“I think I was even more surprised. What the hell was I doing? I’d never been interested in women as anything other than friends. I felt so confused. This just wasn’t me! I was stunned that I’d been friends with her for so many years and never noticed our chemistry,” she remembers. “I soon discovered that we connected sexually in a way I’d never experienced.”

19 years later, the pair are still together with Wierson working as Peterson’s assistant. In her book, Peterson also reveals why she kept the relationship secret until now.

“Would my fans hate me for not being what they expected me to be?” she wonders in her memoir. “I’m very aware that there will be some who will be disappointed and maybe even angry, but I have to live with myself, and at this point in my life, I’ve got to be truthful about who I am.”

“For the first time in my life,” she adds, “I’m with someone who makes me feel safe, blessed, and truly loved.”

Thus did a gay icon reveal she’s part of the family. Now that is something worth screaming over.