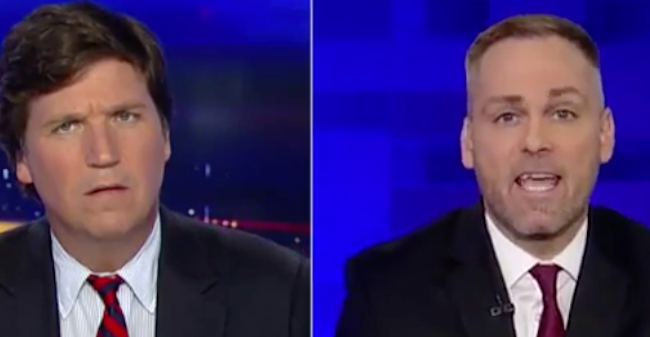 You may remember Chadwick Moore, the gay writer who penned OUT‘s much-ballyhooed Milo Yiannopoulos profile, and later “came out” as conservative in the face of the backlash. He certainly hopes you do.

No stranger to FOX News, Moore was recently invited back to once again talk with Tucker Carlson. (Back in February, Carlson described Moore as someone “who has done just about the bravest thing a gay Brooklyn journalist can do: he abandoned trendy lifestyle liberalism for something else.”)

Related: Chadwick Moore, gay writer who “came out” as conservative, tells his story to Tucker Carlson

This time, Moore was brought on the show to discuss a vigil that took place at Stonewall Inn to remember the 49 people killed in the Pulse massacre, which was organized by Gays Against Guns. The invitation described the event as

“a solemn and joyfully defiant experience as we remember the tragedy that brought the fight for gun violence prevention directly into our LGBTQ nightlife community. on the one-year anniversary of the Pulse massacre in Orlando, in which Omar Mateen murdered 49 people.”

The event itself reflects a general shift in how the LGBTQ community is choosing to congregate following Trump’s election, using the vigil as a way to protest Trump’s regime in the same way this year’s Pride parades are more akin to resistance marches than outright celebrations.

Chadwick Moore, who attended the vigil, was invited to FOX to discuss this change.

“So Chadwick,” Carlson begins, “this was supposed to be a vigil for the people who die, almost 50 who died in that massacre, but it became something else?”

“That’s right. I think most people showed up, the Stonewall is sort of gay, it’s a gay holy site, right. It’s the equivalent of Mecca for Muslims. It’s where everyone goes when there’s a large event that has affected the community, whether that’s tragic or celebratory. It’s where people would have instinctively shown up to commemorate the one-year anniversary. What happened is this far left anti-gun group essentially got the permit, I’m assuming, to hold a rally that day, outside, yesterday outside of Stonewall. They were the sponsors of this event. So people who were coming to mourn, who were coming to be together to reflect, who wanted to give politics a break instead were being subjected to this sort of anti-gun propaganda, all of these signs, all of this anti-Trumpism.

Later on, Moore insinuates “most gay people” have absolutely no interest in gun rights and would rather suntan in their Speedos while listening to “Swish Swish.”

“Most gay people aren’t political. Most gay people, you know, they care about pop music and going to the beach. They probably don’t know what the Second Amendment is. And so they show up to be together, to celebrate the community, to mourn together and instead they are fed this anti-gun nonsense.”