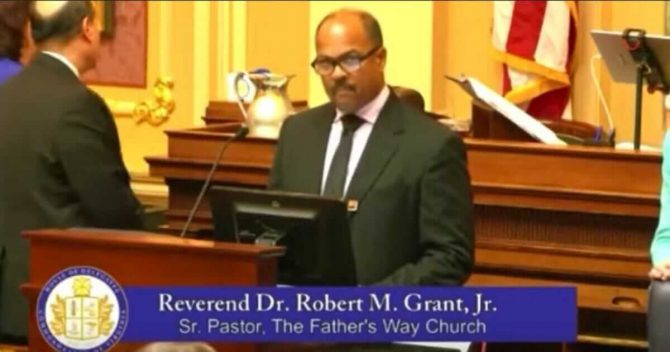 Chaos erupted inside the Virginia State Legislature this week when a local pastor unleashed a seven-minute homophobic diatribe on the House floor.

Rev. Robert Grant Jr. of the Father’s Way Church in Warrenton, Virginia was invited to give the opening prayer for the legislative session. Generally speaking, the ceremonial prayer is meant to be nonpolitical and appeal to a broad number of faiths and backgrounds.

Evidently, Grant didn’t get that memo. Or, rather, he just didn’t care.

After warning House members they were at risk of suffering God’s wrath for not following the words of the Bible, Grant began railing against same-sex marriage.

“Marriage is to join a biological male and a biological female in holy matrimony, not to provoke the Almighty God,” he raged. “Without laws to protect traditional marriage, Virginia will be reduced to increased fatherless children and welfare victims and homelessness, a tax burden to us all!”

As he was speaking, someone from the room called out, “Is this a prayer or a sermon?”

“I pray that this chamber will uphold the Virginia family,” Grant continued. “That the bills and laws being passed will always protect the Biblical traditional marriage as God instructed the first man and the first woman in the Bible. That the two shall be one flesh. That the man and the woman shall be fruitful and multiply.”

“We should never rewrite what God has declared!”

Many Democrats began walking out of the sermon, and even some Republicans started moving to the back of the chamber to get as far away from Grant as possible. Eventually, Speaker of the House Eileen Filler-Corn abruptly ended the madness by banging her gavel and breaking into the Pledge of Allegiance.

Grant had been invited to give the prayer by Del. Michael Webert, a Republican. As he was shuffled out of the room, a member of his entourage asked reporters if they knew sodomy used to be punishable with death.

Speaking to a local media outlet afterwards, Grant said: “I think that the statehouse belongs to all the citizens. And all the citizens have a voice. If it’s my turn to have a voice, and I am a pastor, what do you expect from me? If you don’t want to hear what a pastor has to say, then don’t invite one.”

Outrage over Grant’s words was bipartisan.

“It was totally disrespectful to all of us, all of us in this House,” Del. Luke Torian, a Democrat, said afterwards.

“I don’t know if he was ill-instructed or didn’t realize what he was here to do,” added Del. Matt Fariss, a Republican. “This wasn’t the place or the time to do all of that. This is a time we need to be working together and not being divisive.”