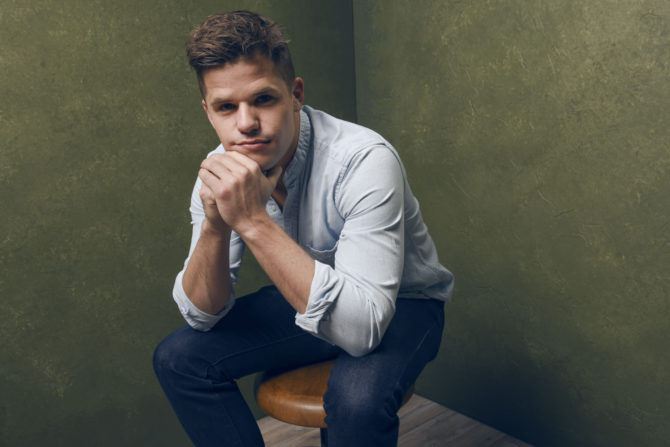 Actor Charlie Carver came out via a moving, five-part Instagram essay one year ago and recently sat down with Entertainment Tonight to reflect on his life before and after.

Carver said he was inspired to come out after seeing a sign that read, “Be who you needed when you were younger.” He said he was “a proud gay man” but “was of the opinion that my sexuality could stay off the table.”

Carver, who came out to his family when he was 17, said he was changed in part by the experience of making the movie “I Am Michael,” a new biopic about Michael Glatze, a gay activist who renounced his homosexuality and embraced religion and the ex-gay movement.

Related: Ex-Ex-Gay says celibacy makes him feel like Jesus, so you should try it, too!

He tells Entertainment Tonight that working with an out filmmaker, Justin Kelly, and actor, Zachary Quinto, gave him perspective.

“I’m so glad to have met, worked with and become friends with Zach,” he says. “He’s somebody who I admire very much and somebody who has carried who he is out in the public in a very admirably way.”

Carver also has a small part in Dustin Lance Black‘s upcoming ABC miniseries “When We Rise,” about the fight for LGBTQ rights in America.

“For me, I wanted to feel I was in a place where I could work comfortably and where I felt like I had something to say,” Carver says. “Part of my decision to come out was because I was ready to take on that conversation in a more public forum.”

He appears to not fear being typecast, saying he will proudly take on more gay roles.

“One thing I warned myself to do is never to be afraid to take another gay part, especially a well-written one,” he asserts. “I just think, How can I create? How can I have the career I want, but also, how can I contribute to expanding the narrative available to LGBT people and the narrative for people to see? I think there are a lot of stories that happen to include LGBT voices that aren’t told.”

“Having out actors playing out people is important, in terms of representation,” he adds.

Kelly describes getting goosebumps from Carver’s acting in “I Am Michael,” saying he was able to make you feel not only for his character but also for Michael’s character, “who at that moment is so clearly lost and confused.”

In “When We Rise,” Carver plays a U.S. Navy sailor who has a secret relationship with soldier-turned-gay activist Ken Jones.

Carver explains that his research for the part took him to a special place:

“In trying to situate myself and imagine what it would have been like living at that time, I came across a couple of people,” he says, specifically highlighting the story of Leonard Matlovich, a Vietnam War veteran who was dishonorably discharged from the Air Force and later died of complications from AIDS. Now buried in the Congressional Cemetery in Washington, D.C., his tombstone reads: “When I was in the military, they gave me a medal for killing two men and a discharge for loving one.”

“His tombstone is one of the most beautiful things I’ve ever read,” Carver says after reading it aloud over the phone. “I think it speaks a lot to what this series is trying to get across.”

He is also working on some projects with his twin brother, Max, with whom he often works, including appearing in the film “Fist Fight,” with Charlie Day and Ice Cube, as well as developing the series “Blooms” for MTV.

He reports being excited to see his two solo efforts coming out when they are, hoping it helps him carve out a place in the acting world all his own.

“Out of all the things I have worked on individually, I am really excited for these to be coming out when they are,” he says. “There’s a lot to look forward to this year.”