Openly transgender director Chase Joynt’s new documentary Framing Agnes is about to debut at the Sundance Film Festival. It chronicles a group of six trans people living in the 1950s and 1960s, as interviewed by UCLA professor Harold Garfinkel at the UCLA Gender Clinic.

Though Garfinkel had little interest in gender theory or queer studies, his work offers a rare glimpse into a pre-Stonewall era of transgender life. Joynt creates reconstructions of the actual interview subjects and their lives, utilizing a noteworthy cast that includes Angelica Ross, Jen Richards, Silas Howard, Zackary Drucker, and Max Valerio.

We caught up with him to talk about the unexpected origins of his film and the fascinating revelations of the Garfinkel tapes. Here’s what he had to say…

How did you first hear about the UCLA tapes?

I got a fellowship to work with my friend and collaborator Kristen Schilt to work at the University of Chicago. The only requirement of the fellowship was that we co-teach a class together called “The Politics of Narrative Construction” using Agnes as a case study. Through a series of fortunate events, we got access to the archives of Harold Garfinkel, the UCLA professor that interviewed Agnes [the trans woman the film is named after] for years. We started archiving boxes that had been waterlogged, old luggage, stationery from the 1960s. We made our way to a rusted file cabinet, bought a crowbar on lunch, and found the case files. For the geeks in the room, UCLA had gone through Garfinkel’s collection already and cataloged what they thought was interesting. But because it was rusted shut, they passed it over. 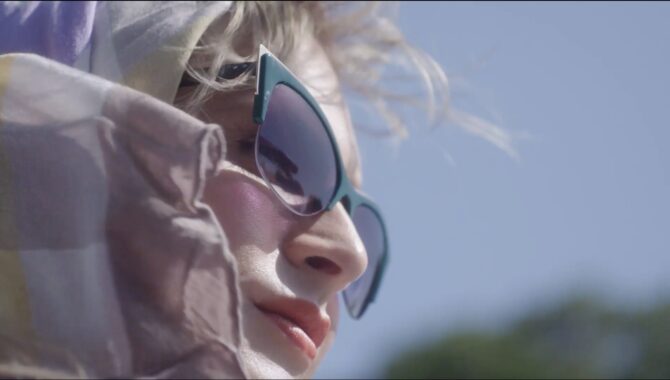 Tell me about Garfinkel. Just the idea that a scientist in the ’50s and 60s would approach trans people for interviews, and not for the purposes of condescension or conversion therapy, is incredible unto itself.

Garfinkel was a maverick. To be frank, he wasn’t all that interested in queer or trans studies. He was a sociologist. He was developing a theory about passing. We think about passing as it relates to race, to gender. He was thinking about it very capaciously, in terms of vocation. What does it mean for someone to pretend to have a driver’s license, but they don’t? Agnes became a perfect case study because she has an impenetrable narrative that we get access to. Nobody else in the archive was passing the way Agnes was.

You use a documentary/scripted hybrid approach in the film. Why did you choose to do it that way?

To me, the project is deeply rooted in collaboration. It feels important to me to re-engage the frame, to take seriously the title of the film at every turn. Who’s in? Who’s out? What is the structure of technology that dictates how we understand this information? When you think about the intimacy of the Super 8 sequences that are scripted, we envision those as private. Then you snap out to the industrial, alienated, television journalism frame, and you have different expectations. I think it’s through that switch and investment in technology that you break open those opportunities.

Much of the movie revolves around you and the cast discussing these tapes and the stories contained in them. Why was it important for you to include those segments?

The film is really trying to push back on the way we attach to archives as a way to find the truth about something or someone. Everything is always mediated. People we encounter on the page are in a clinical environment trying to get something out of the subject. Already we know that’s not the truth, it’s kind of packaged. So I treat the archive as an access point to different kinds of conversation. So that is the way those transcripts feel inside someone’s body. It becomes an extraordinary way to tell a story. What does it mean for someone like Max to think about who Henry was as a writer? What does it mean to Max as a poet? You can’t script that kind of interior response.

In reviewing the tapes, what did you connect with the most?

There are two ways to answer that. I became immediately attached to the non-trans subjects. I focused on the kind of questions that were being asked. How is Garfinkel asking a question from this person, taking an answer, and attaching it to another question? He’s building a case to figure out what is happening in this community. The other answer to your question is that trans people are funny, sharp, and very quick-witted in the face of institutional scrutiny. It’s a joy to watch people move certain senses that are incredibly claustrophobic.

So much of your body of work deals with the trans narrative, and particularly trans history. Do you feel an obligation to tell trans stories?

I started making work in a moment where there was very little about trans experience that made sense to me in a broader moving image culture. It really was a knee-jerk pursuit. Now I feel strongly that the kinds of trans representation that permeate our culture are limited and packaged for mainstream consumption in a way that has stripped many nuances from it. So there is a new driving force behind my work: to complicate the terms and unsettle the way it gets packaged.

Do you think of yourself as an iconoclast?

I mean, to take the question seriously—to call something an “iconoclast” is to say that one is deteriorating or taking apart an icon. So to that definition of the word, wholeheartedly. I think what Agnes is trying to do is take apart the very notion of a trans, iconic subject.

Interesting. In talking to you now, maybe the term is “deconstructionist.” Are you a deconstructionist? It’s also interesting to consider the number of deconstructionist queer—especially trans—artists out there. Kate Bornstein, Lana Wachowski. Is that connected to transness on some level?

I think it must be. We’ve always existed within and against binary logic. So we always have to create new terms to account for our community.

Framing Agnes screens at the Sundance Film Festival through January 31 and is currently seeking distribution.