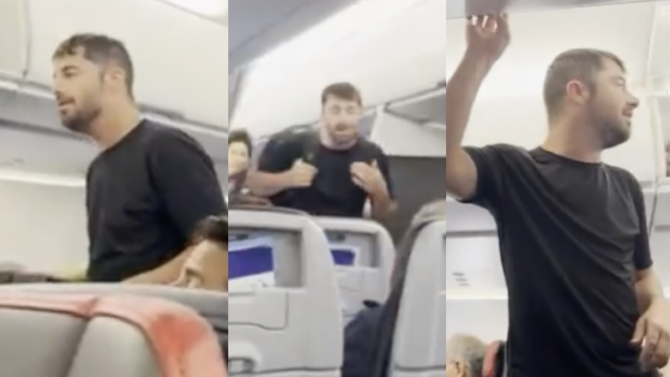 There are plenty of ways to get fired, but this has to be the stupidest.

A man was removed from a flight after reportedly bothering his seatmate, but not before he went on a homophobic and racist rant. But what really sets him apart from your run-of-the-mill airplane a**hole is the part where he urges onlookers to reach out to his employer.

TMZ gained footage of the disturbance, which took place August 30th on a flight scheduled to fly from Philadelphia to Dallas.

Related: The debate over LGBTQ equality has devolved into arguing over metaphors about seatbelts on airplanes

In the video, the man identified as Zachary Easterly says he’s “a little intoxicated,” which seems like an understatement. As flight attendants try to escort him off the plane, he calls everyone on board the plane “liberal f*gg*ts.”

Then, while staff tries to help him locate his bag in the overhead storage, he says, “Obviously, I’m a white male that picked a black bag ‘cuz I’m racist,” and adds that his bag is “a better bag than most of y’all can afford.”

After yelling “f*ck all ya’ll!”, Easterly says, “I hope all you liberal f*gg*ts f*cking crash the f*cking plane.”

Not quite done digging his own grave, he announces “I’m a chemical engineer… I work for GlaxoSmithKline.” Before finally exiting the aircraft, he suggests people “reach out to the company.”

Well, ask and you shall receive!

GlaxoSmithKline, a pharmaceutical and biotechnology company, told TMZ: “We immediately conducted an investigation and as of Thursday, he is no longer employed at GSK. The person’s remarks were reprehensible and do not reflect our company culture.”