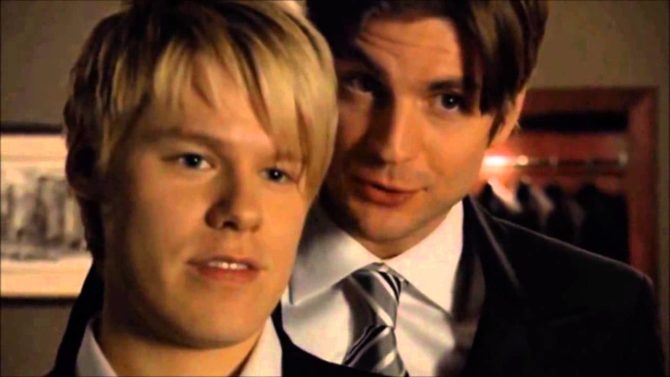 Santa Claus Is a Criminal Mastermind
Sherlock Holmes and John Watson deduce clever ways of releasing the stress of their first Christmas with Sherlock’s family as a married couple: “The rest of that thought was consumed by the hungry, biting kiss, and John gave as good as he got. He tangled his hands in Sherlock’s jacket and pulled him closer. Without breaking the kiss, Sherlock reached out with one long arm to latch the door shut.”

An Overly Wrapped Present
Tony Stark a.k.a. Iron Man finally succeeds in disrobing Doctor (Stephen) Strange: “Tony looked down at Stephen, lit by the hundreds of light white lights on the tree. The soft lighting showed everything, the sheen of sweat, the flush across his chest, his mussed hair starting to go a bit curly in places, and the light eyes glaring at him.”

Lighted Up!
An adult Harry Potter gets tangled up trying to take sexy photos of himself for Draco Malfoy: “A naked Harry Potter was lying on the floor, wrapped up in Christmas lights, with a camera closely next to him. The strand of the lights was too tight to be comfortable, tying his hands together … His words and complaints were muffled. They came out like gasps and hissings and Draco was having problems at remaining concentrated in the situation.”

Related: 10 last-minute gifts that will arrive before Xmas and keep the yuletide gay

The Spirit of Giving
Peter Parker a.k.a. Spider-Man decides to give Wade Wilson a.k.a. Deadpool an XXX-tra special gift for Christmas: “While he had been thinking about it a lot, it wasn’t something he had done before, but he was going to make sure that Wade enjoyed it anyway. ‘You’ll have to bear with me, this is my first time.’”

Whipped Cream and Second Chances
Queer as Folk’s Brian isn’t letting Justin focus on cooking a Christmas feast. “‘Oh, it’s hard.’ ‘Well, duh.’ … ‘No, I meant the cream. It’s time to add the eggs, sugar, and vanilla seeds and put it in the freezer.’”