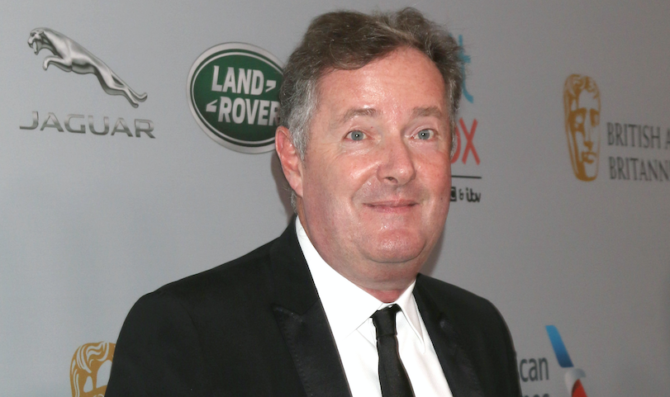 While it’s hard to pick a low point for British TV personality Piers Morgan, Wednesday’s show proved he can’t even endure a wee thimbleful of his own medicine.

The Good Morning Britain host stormed off the set of his own show after a co-host called him out on his relentless, negavie Meghan Markle coverage.

Weatherman Alex Beresford called Morgan “diabolical” as he fled from the broadcast.

The snowflake-esque walkoff came just after Beresford noted that Meghan and Prince Harry were treated poorly by the British press, including Morgan.

Beresford added that Morgan was once friendly with Markle, and that one of the reasons he’s always bashing her is because she cut him off.

Needless to say, the internet had strong reactions to witnessing a bully’s feathers get this easily ruffled to the point of throwing a fit.

“So Piers Morgan trashes a pregnant woman, bullies another one about the length of her skirt and storms off his own show upon the slightest criticism from a male colleague,” wrote Claudia Black on Twitter before asking, “Would HR care to weigh in on the source of toxicity in this workplace? How does this man have a job?”

Here’s how folks were responding:

Yesterday Piers couldn't believe that someone may feel suicidal after 4 years of constant vitriolic abuse from all angles. Today he has to sit through 30 seconds of someone (rightly) pointing the finger at him and he losses the plot.

Meghan Markle decided that one outing with Piers Morgan was enough forever. So she ghosted him & married the world’s favorite prince.

And then he spent the next 5 years stalking and harassing her, and assassinating her character, thus proving her right.pic.twitter.com/tCRUnSw1IX

The trash took itself out

This is it. Someone finally captured it perfectly. Piers needs to hear some home truths because he has behaved like an egotistical and overly entitled nuisance over this issue. Absolutely brilliant and good riddance as Piers waddled off set. He couldn’t digest some home truths.

Ooof. It’s almost like he touched THE nerve. Could it be that he was a little bit infatuated with her and didn’t take being friend zoned then ghosted very well?

I've paid near zip attention to all this, but this is too perfect. Piers is just British Trump. Can't shut up for 1 minute, and the sec he's on the receiving end stomps off like a baby. Maybe America & Britain are in the shape we're in bc our media has promoted these types of ppl

I wonder what Piers would have done if the British press had been attacking him consistently for the past 4 years if he can't sit and handle a 2 minute criticism.

He can pretend but the evidence proved otherwise as grand patron HATE campaigner… pic.twitter.com/y84iwnISRd