When We Rise, the long-awaited TV miniseries about the battle for LGBTQ rights, premiered its first two hours last night to mostly positive reviews. The show isn’t subtle, and the direct, in-your-face approach does the subject justice. For the real life heroes who shed sweat and blood in the struggles for LGBTQ rights, for women’s rights, and for civil rights, the stakes were often as dramatic as life and death, freedom and oppression, dignity and suffering.

Since the show starts with so many seemingly disconnected stories (we suspect things will coalesce as the narrative progresses), a clever storytelling thread is used to anchor everyone in time and place. Multiple characters are seen holding or reading the 1971 “Year in Pictures” edition of the now-shuttered Life Magazine, a sub-brand of Time Magazine.

The real-life magazine issue included a groundbreaking photo spread titled “Homosexuals in Revolt,” and included the words “Gay Liberation” on its cover. In the table of contents, the feature is described as “A major essay on America’s newest militants, the activists of ‘gay liberation.'”

Here’s a shot of the cover from the show: 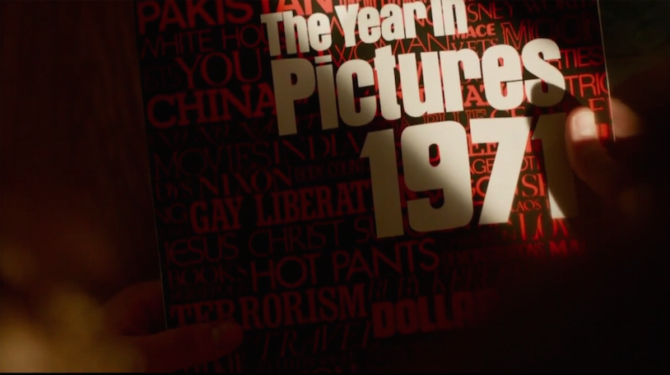 And here’s the full cover (a near-mint copy can be yours on E-Bay for the near-reasonable price of $69):

In episode one of the series, we also get glimpses of content from the feature:

Here’s a closer look at some of the now-iconic imagery from this issue, together with the captions as they were printed in 1971, courtesy of Time Magazine:

You can find more of the images here.

Here’s a sample of the copy in the feature:

It was the most shocking and, to most Americans, the most surprising liberation movement yet. Under the slogan “Out of the closets and into the streets,” thousands of homosexuals, male and female, were proudly confessing what they had long hidden. They were, moreover, moving into direct confrontation with conventional society. Their battle was far from won. But in 1971 militant homosexuals showed they they were prepared to fight it…They resent what they consider to be savage discrimination against them on the basis of a preference which they did not choose and which they cannot — and do not want to — change. And while mist will admit that “straight” society’s attitudes have caused them unhappiness, they respond to the charge that all homosexuals are guilt-ridden and miserable with the defiant rallying cry “Gay is Good!”

As you can imagine, many Life readers in 1971 were appalled by the coverage.

Here are two reader-submitted responses that were printed in the 1972 edition of the magazine:

From Telford, Penn. — There was plenty to lament in your year-end issue, but the thing that struck me as most sad was the fact that LIFE felt compelled to devote 11 pages to “Homosexuals in Revolt.”

From Chicago — Essentially, it is absurd to accept as a mere “variant lifestyle” a practice which, if universal, would mean the end of the human race.

We owe it to ourselves and to those who fought to keep this not-so-distant past fresh in our minds as we take the fight into the 21st century.

When We Rise continues to air on ABC this week.