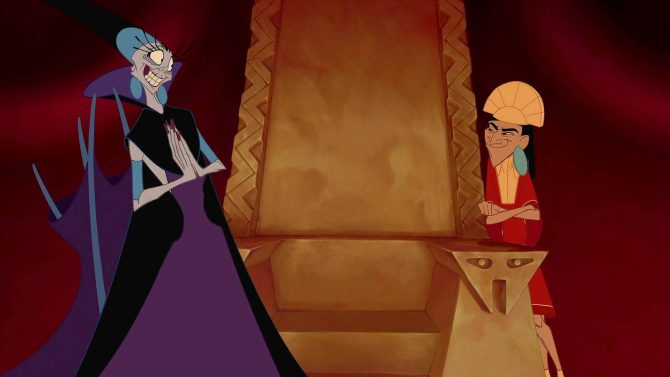 The Bananas: The Emperor’s New Groove

Though not exactly as popular as Frozen, Pinocchio or Beauty and the Beast, The Emperor’s New Groove qualifies as one of the greatest films in the Disney animated canon. The reason: it’s funny as hell. David Spade stars as a haughty and selfish South American emperor named Kuzco (gee, know any men like that?) who decides to bulldoze a village to build his new palace. That puts him into conflict with the peasant farmer, Pacha (John Goodman), who will have his home destroyed by the new construction. Amid the wrangling over real estate, Kuzco’s court sorceress Yzma makes a move to become empress, transforming Kuzco into a talking llama. Patcha & Kuzco must join forces to stop Yzma’s conquest, and return the emperor to his human form.

So wherein lies the queer interest? Two words–Eartha Kitt. The real-life (and occasional screen) Catwoman and gay icon gets her best film role as Yzma, camping and purring out a performance both seductive and downright hysterical. Add to that one of the zaniest scripts Hollywood has ever produced, and the resultant movie explodes with humor and quotable dialogue, particularly for Ms. Kitt to deliver. Playwright David Mamet called The Emperor’s New Groove one of the best screenplays ever written, and we can’t get enough of the movie’s outrageous laughs, or Eartha Kitt’s irresistible performance.