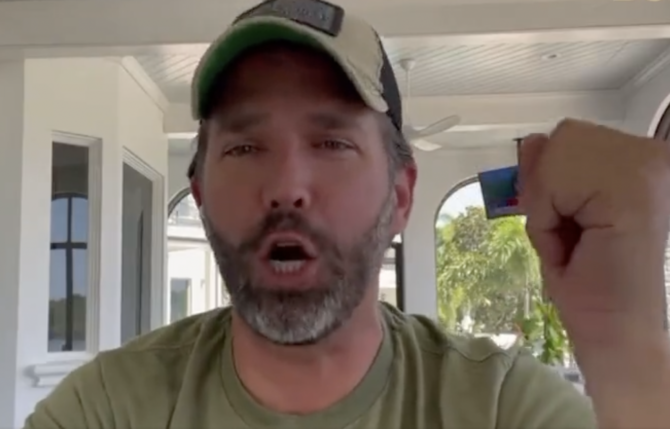 Donald Trump Jr. is getting dragged on Twitter this morning over a black bear and a plate for donuts.

The ex-president’s eldest son is under scrutiny after a guide who helped him kill a black bear on a 2018 hunting trip in Utah was just charged with illegally baiting the animal.

Wade Cox Lemon has been charged with “wanton destruction of protected wildlife,” a 3rd-degree felony, by the Utah Attorney General’s Office.

According to the charging documents, 61-year-old Lemon “personally guided a client on a successful bear hunt” in Carbon County on May 18, 2018.

A “concerned witness” later contacted the Utah Division of Wildlife Resources to report “a pile of grain, oil, and pastries” in the area after the hunters left. The witness also said the group was hunting with dogs.

DWR agents went out to investigate and found a half-eaten donut in front of a trail camera with Lemon’s initials and phone number on it. Footage on the camera showed “the bear surrounded by a pack of hunting dogs before the client shoots and kills the animal.”

“Utah law forbids luring bears to a bait station and then pursuing the animal with dogs,” the charging document reads.

Though Don Jr. himself hasn’t been charged with anything, a report by the Utah Investigative Journalism Project and the Salt Lake Tribune confirmed he was the client Lemon took out on the hunt that day.

If you use oil, pastries, and a pile of coke you can catch Don Jr.

Don Jr. was the kid who came home with dead animals after playing outside because daddy issues.

So Don Jr. doesn't need all his macho manly alpha guns to kill a bear, just a douchey hunting guide with a plate of pastries.

So is Don Jr going to have the same felony charges against him his hunting buddy has for using illegal bait to kill a bear?

MAGA loves the fact Don Jr. baited in a bear with donuts and killed it. It reminds them of the 2016 election.

Hunting guide Wade Lemon used "a pile of grain, oil and pastries" to lure a bear that Don Jr then killed, authorities say.
A prime example of how Trumps use others to make it appear they are powerful and instead look even more ridiculous.

Many people are saying that Don Jr. also caught Kimberly Guilfoyle with a plate of pastries.

If there is a god out there, please let her be compelled to give Don Jr. monkey pox.

Don Jr murdered a bear and now his guide is facing up to 5 years in prison.

Remember in the old days how when a young Prince misbehaved, they would whip a young boy in his stead?

This isn’t the first time one of Don Jr.’s hunting excursions has ignited controversy.

In 2019, he traveled to Mongolia where he illegally killed a rare argali sheep. The Mongolian government later issued him a hunting permit retroactively.

Related: Adult child Don Jr. is freaking out about not getting his way. It’s not going well for him.

Then, of course, there’s that decade-old photo of him proudly posing next to a dead elephant with its severed tail in hand during a hunting trip in Zimbabwe.

Don Jr. defended the photo to a Forbes contributor by arguing that elephants were overpopulated in that region and cutting off its tail was a tradition.

In a 2016 interview with Breitbart, he called hunting a “passion” of his and that “the discipline, the good times, the bond that I’ve had in a hunting camp, around a campfire, on a shooting range” were important “values” that he hoped to pass on to his kids.

Related: These big ‘gay’ billboards are heading to Florida … and Don Jr. is raging