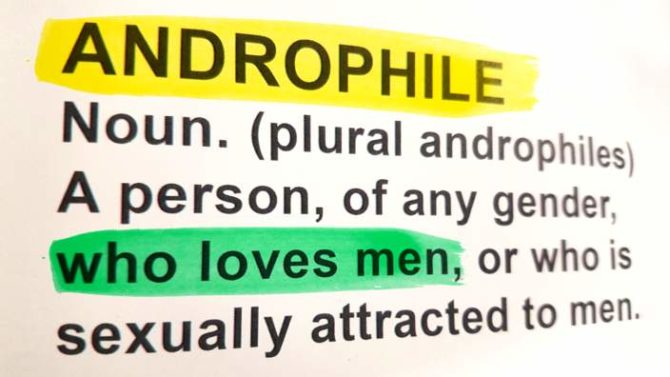 “I think ‘homosexual’ is a bit clinical, and lots of people use it negatively,” Nicolas Chinardet tells the BBC. “‘Gay’ has a certain lifestyle attached to it, which I don’t recognize myself in.”

For instance, he says, “I don’t go clubbing. I don’t like shopping.”

Which is why he identifies as an “androphile”

Urban Dictionary defines androphilia as “the attraction to men or masculinity.”

“It’s a polite, nonspecific way to ask what a certain person is attracted to. An androphilic man is homosexual, while an androphilic woman is heterosexual.”

Related: Is it time to ditch ‘masc’ and ‘femme’ labels once and for all?

Chinardet claims to have coined the term “androphile” in the early 2000s as an alternative way to describe himself as a man who is sexually attracted to other men.

He explains, “I made it up from my vague knowledge of Greek. Putting two bits together–the prefix ‘andro’, meaning man, and ‘phile’, denoting a love for something–to come up with androphile.”

Since then, more and more men have adopted the label. Interestingly, a lot of them tend to be conservative alt-righters or what some might describe as “self-hating gays.”

Take, for instance, 37-year-old Henning Diesel. He is a self-described androphile and alt-righter who rejects the label “gay” because he thinks it’s for sissies.

“Gay is part of the LGBT+ world that I never see myself as part of,” he explains, adding that he doesn’t enjoy “gay music, like Lady Gaga, Ariana Grande, and Miley Cyrus” or “gay TV and movies, like Queer As Folk.”

He describes himself as having “typically male characteristics like courage or diligence – very traditional aspects” and rejects the “gay moment,” calling it “advocacy for socialism” that’s rooted in left-wing politics.

24-year-old James Milton says he began identifying as an androphile about six years ago when he was struggling to find a place in the disenchanting LGBTQ community.

He tells the BBC that it “affirmed my suspicion that I wasn’t gay–just a man who happens to sleep with other men.”

“I didn’t relate to the pre-determined gay identity,” he says, recounting the many times he was mocked at gay bars for requesting the DJ play country music instead of more traditionally “gay” stuff like Britney Spears, Beyonce, or Madonna.

“Those kinds of experiences directed me to the label ‘androphile’,” he says.

Milton adds that he’s a fan of manly stuff like wrestling and mixed martial arts.

Chinardet says the androphile label is definitely about rejecting certain gay stereotypes, but the fact that alt-righters have begun embracing it is definitely cause for concern.

“I think I’m going to have to review my description,” he says. “I want absolutely nothing to do with those people.”