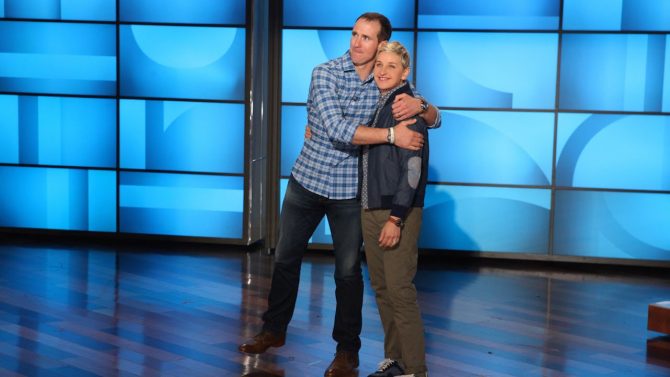 New Orleans Saints quarterback Drew Brees appeared blindsided last week by a wave of negative press about his nearly decade-long affiliation with the antigay hate group Focus on the Family.

After the beloved NFL player starred in a new “Bring Your Bible to School” video for the extremist group, it was revealed that he also had a profile on its official website published in 2015 and was once a guest on its hate-filled radio program. The 2010 broadcast is still up for sale on Amazon for $1.99.

When confronted by reporters on Thursday about all this, Brees denied having any knowledge of Focus on the Family’s homophobic stances and then blamed the media for writing negative headlines about him.

“Why would you post a headline like that? Why?” Brees said. “What’s a shame is that people will make headlines just to get hits, just to get views.”

Over the years, Brees has appeared on The Ellen Show half a dozen times or so and has partnered with her on several different occasions.

In 2010, he filmed an anti-bullying PSA for her telling everyone that “bullying needs to stop” and that “making fun of someone for being different” is “ignorant.”

And just last month, he tweeted that he had helped raise over $40,000 for her wildlife center in Rwanda.

We were able to raise $41,507 for the Ellen DeGeneres Campus of the Dian Fossey Gorilla Fund!! Thank you to all who participated in the raffle and especially @solesbysir Marcus Rivero who painted these beautiful… https://t.co/9qjDipr0jT

Ellen calls Brees her “favorite quarterback” and even keeps one of his jerseys on display in her studio.

So surely, she must have a few thoughts about his involvement with one of the leading antigay hate groups in the country?

So far, Degeneres has been radio silent over the whole thing, instead tweeting out birthday messages to folks like Idris Elba and Pink and posting clips from old episodes of her talk show in the lead up to its Season 17 premiere.

And people are noticing.

I know @TheEllenShow is a big fan of @drewbrees. What does she have to say about this? https://t.co/k5UMGtLzOI

Hey @TheEllenShow Could you talk to your good friend @drewbrees about making a video for Focus on the Family? I'm sure you know that's an awful group that promotes Anti-LGBTQ views. I'm all for practicing your faith, except when it promotes hate of other humans.

I wonder if @TheEllenShow has seen this?! Given he has his own seat and his jersey displayed in the studio…. https://t.co/LSLC0Df2GZ

@TheEllenShow Need to hear from you regarding Drew Brees joining hate group!

It could very likely be that Ellen is still working out a strategy for how to handle the situation. We wouldn’t be surprised if she has Brees on her show in the near future to talk it out. (Let’s just hope she handles it better than she did the Kevin Hart fiasco.)

…Or maybe she’s just been too busy preparing for the new season, which premieres today, to notice?

…Or maybe, though we doubt this is the case, she’s waiting for the whole thing to blow over? Perhaps the $40,000 Brees helped raise for her Rwandan elephants last month was enough to buy her silence.

Whatever the reason, all eyes are on the beloved talk show host and LGBTQ role model. Here’s hoping she says or does something and soon because her silence on this matter is turning deafening.

We have reached out to Degeneres for comment and will update this article if we hear back.