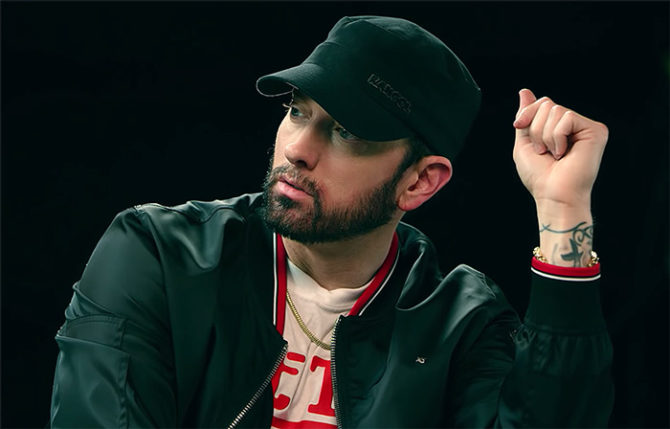 Rapper Eminem came under fire recently for–surprise!–singing some homophobic lyrics on his new album. Specifically, he was criticized for making derogatory remarks aimed at rapper Tyler the Creator. Now, in an interview with Sway, he’s expressing regret over his choice of words.

“With the Tyler the Creator thing I realize now,” the 45-year-old rapper tells Sway. “I realize I was angry when I said the sh*t about Tyler.”

So he called him a “f*ggot bitch” in his song “Fall”, a diss track off his album Kamikaze released last month.

The exact lyrics were:

Tyler create nothing, I see why you called yourself a faggot, bitch
It’s not just ’cause you lack attention
It’s ’cause you worship D12’s balls, you’re sacrilegious
If you’re gonna critique me, you better at least be as good or better

The rapper was responding to a tweet Tyler wrote back in 2017, describing his song “Walk on Water” as “horrible”.

But Twitter was not having any of Eminem’s latest homophobia:

If you still use that slur in a rap lyric, you're a homophobic ass and I don't fucks with you. Get your basic shit together, Eminem.

Can't even say I'm surprised that Eminem is still using homophobic slurs in 2018 bc he's a fucking child but Justin Vernon, what the hell are you doing on the track man. pic.twitter.com/z2ySJBNF85

big 2018 and eminem still dropping albums with homophobic slurs on his songs, can this old man just call it quits already

In the interview with Sway, Eminem continues: “The word that I called him on that song was one of the things where I felt like, this might be too far. Because in my quest to hurt him, I realized that I was hurting a lot of other people by saying it.”

“It was one of the things that I kept going back to going ‘I don’t feel right with this,’” he adds. “Now I realize people can hear what I’m saying anyways…I wasn’t in the right mind frame. I was angry.”

Got that, folks? Eminem is nearly half a century old and he used a gay slur because he was “angry”. You understand, right?